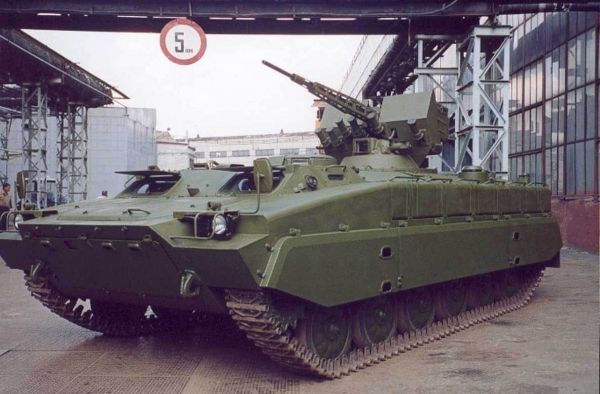 Ukraine's UkrInnMash Corporation is developing the Shturm-SM-2 tank destroyer based on the widely deployed MT-LB multipurpose tracked armored fighting vehicle (AFV) that was originally manufactured in the Ukraine and in service with over 20 countries.

The rear troop compartment of the baseline MT-LB has been raised to provide greater internal volume for its new role and fitted with a retractable launcher which can be raised up to a maximum height of 3 m, Jane's 360 wrote.

The launcher is equipped with four RK-2M laser guided missiles (LGM) in the ready to launch position with the day/night target engagement pod in the middle. The vehicle carries eight missile reloads internally.

The RK-2M LGM can be armed with several warhead types, including a tandem high-explosive anti-tank (HEAT) warhead that is claimed to penetrate at least 1,100 mm of steel armor protected by explosive reactive armor (ERA). It can also be fitted with a high explosive fragmentation/explosively formed penetrator (EFP) warhead which is claimed to be capable of penetrating at least 120 mm of armour.

The baseline MT-LB is typically equipped with a manually operated turret armed with a 7.62 mm PKT machine gun (MG).

However, this has been replaced by a locally developed remote weapon station (RWS) armed with a stabilized 12.7 mm MG aboard the Shturm-SM-2 variant.

The combat weight of the Shturm-SM-2 is being quoted as 14.5 tonnes and, like the original vehicle, it is fully amphibious being propelled in the water by its tracks at a maximum speed of up to 5 km/h.

If you see a spelling error on our site, select it and press Ctrl+Enter
Tags:Ukrainetank