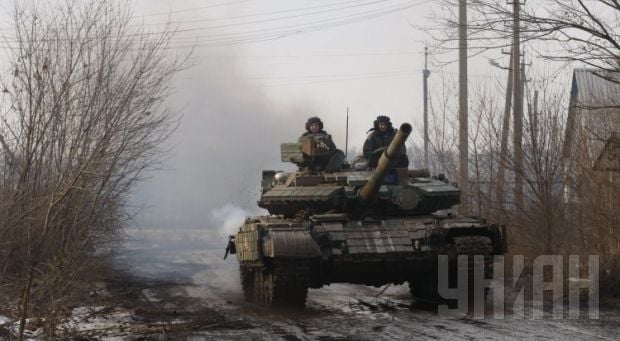 "The most difficult situation has been seen in the area of Debaltseve. Since morning the enemy has been launching powerful shelling on the positions of the ATO forces,” the press center wrote.

“Our military is conducting counter-battery fire. Illegal armed groups are also trying to conduct offensive operations, but they are being repulsed by the Ukrainian army," the headquarters said.

ATO press center also informs that fighting is still raging in the area of Donetsk airport and close to it.

"In the morning the enemy fired five times using Grad multiple rocket launchers at the positions of Ukrainian troops in the area of the village of Tonenke. Shelling with mortars was also launched at Avdiyivka and Marinka. The militants made unsuccessful attempts to attack in the area of Verkhnetroitske."

The ATO press center said that in the morning in the area of checkpoints No. 29 and 31 the militants had shelled Ukrainian positions with artillery and Grad rockets, close to the settlements of Krymske and Nyzhnie.

"Thanks to the competent actions of Ukrainian tank crews, the enemy withdrew, and the area is relatively calm now," the ATO press center wrote.

Meanwhile, it was reported that militants had shelled the positions of Ukrainian forces in the Mariupol area six times.

"New cases were recorded of terrorists opening fire on civilians. An artillery strike was launched on the village of Hranite, and Avdiyivskiy Coke Plant was shelled with Grad rockets. Information about casualties is being checked.”