Russian-backed militants and Russian troops have retreated after their assault on the town of Debaltseve failed on Tuesday, a prominent military blogger and expert has reported. 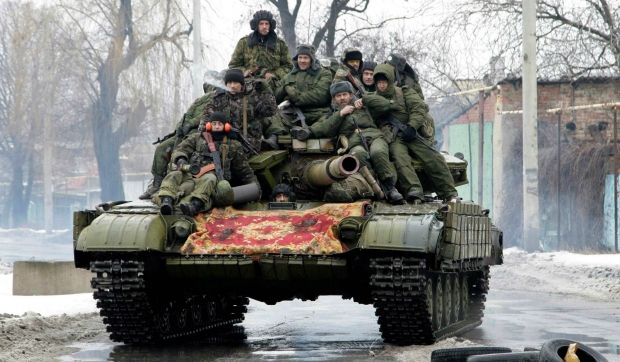 But the militants and Russian soldiers continue to accumulate forces and resources in the Debaltseve area, Information Resistance group leader Dmytro Tymchuk wrote on his page on Facebook on Wednesday.

"According to our data, in various parts of the bridgehead at the moment there are five battalion tactical groups of the enemy fighting (at least one of them staffed by Russian airborne troops) and three consolidated artillery groups," Tymchuk wrote.

In addition, there are numerous small armed units with heavy infantry weapons at their disposal. The total number of Russian troops fighting for the Debaltseve bridgehead is about 2,500 people, equipped with up to 35 tanks, about 50 armored combat vehicles, and 50 artillery units and a minimum of 22 multiple rocket launcher systems.

"In the area of Debaltseve, after an unsuccessful attempt to storm from Troitske toward Svitlodarsk, the Russian-backed militants withdrew to their initial positions to regroup. Movement was observed through Stakhanov of reinforcements to this area (up to 12 vehicles, mostly covered military trucks, and about 18 armored vehicles)," Tymchuk said.