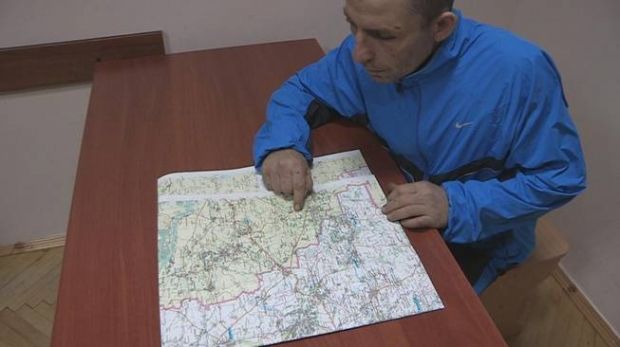 The man was captured after a T-64 tank shelling Ukrainian positions was destroyed by Ukrainian forces during military clashes.

The man, a Russian citizen born in 1973 and a resident of the village Levokumskoye in Stavropol region in Russia, was fighting against the Ukrainian military for the Luhansk People’s Republic (LPR) militant organization.

He said that he was recruited by Russian enforcement bodies, and brought illegally to Ukraine with the assistance of the Russian border guards. He was enlisted in an illegal military formation commanded by Russian officers, he said.

According to the information provided by the detainee to Ukrainian security officers, in December 2014 the man was detained by the police in Rostov-on-Don (Russia) for stealing a car. Later on, a Russian investigator suggested that he and other detainees avoid prosecution by agreeing to participate in “repair work of armored equipment in ‘Novorossiya’ in Luhansk region.

The detainee said 22 Russian citizens, who had been arrested for various offenses, gave their consent to go to Ukraine to participate in the fighting.

According to the detainee, he was appointed by an LPR representative as a tank driver as part of a tank company of the August militant battalion, which is deployed in Krasny Luch. According to the man, the leader of this battalion is a Russian armed forces lieutenant colonel with the call sign "Bee."

The detainee said that in Ukraine he repaired the armored equipment, and after special training he became a mechanic-driver in a tank that was shelling the Ukrainian military.

On January 25, the August militant battalion received full ammunition supplies from of an arms depot in Bryanka, Luhansk region, to which Russian troops brought a large number of weapons. On the command of the Russian officer, 12 tanks moved to Sanzharovka and attacked the Ukrainian positions. The tank driven by the detainee was hit.

The SBU said its investigations continue. The “LPR tank driver" has said he would rather have served his sentence in prison than participated in war in Ukraine, the SBU report said.