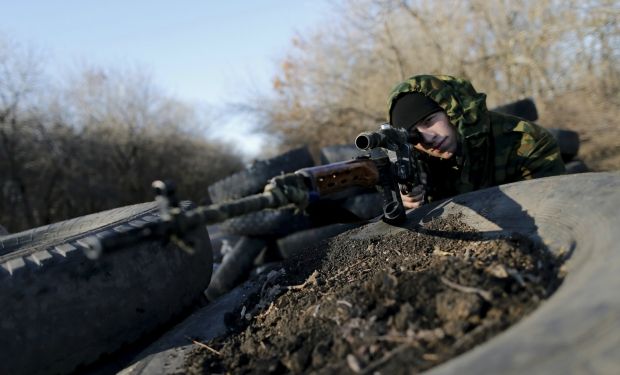 "The Russian-terrorist fighters are firing artillery on the village of Shyrokyne from the village of Bezimenne. The firing positions of the militants are located in the village, and this complicates their neutralization," the report says.

According to the headquarters, the militants are firing both on the village itself, directly on civilians, and on the positions of the Ukrainian forces.

"The Ukrainian armed forces are doing their best to suppress the enemy firing points and to stop another barbaric shelling of residential areas," the report said.

Local news agency 0629 also reported  the shelling of the village of Shyrokyne.

"At 1540 the militants began firing artillery on the village," the agency’s report says.

In addition, it is also reported that due to the difficult situation in the village of Shyrokyne and other villages in Novoazovskiy district, adjacent to Mariupol, the local authorities have begun an emergency evacuation of civilians from the above mentioned villages.

Evacuees from the combat zone near the village of Shyrokyne and the villages in Novoazovskiy district have been sent to Mariupol.

The headquarters of the Territorial Defense of Mariupol, together with the volunteers, have urgently started work on finding accommodation for the arriving citizens. Their work is coordinated by Deputy Mayors Volodymyr Klymenko and Tetiana Lomakina.

The representatives of the headquarters of the Territorial Defense and the staff of the local utility companies meet those arriving from the combat zone at checkpoint No. 15 in the village of Vynohradne and transport them by public transport in the previously prepared accommodation.

The situation is under the personal supervision of the Mariupol Mayor Yuriy Hotlubey.

As UNIAN reported earlier, Ukraine’s Azov volunteer battalion said that fighting was continuing near the village of Shyrokyne.