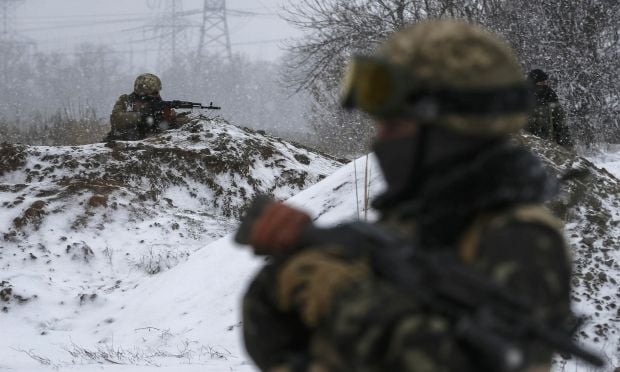 According to a report made by phone to Ukrainian newspaper LB.ua by Yuriy Sinkovsky, the deputy commander of Ukraine’s 40th Battalion, his troops have been practically surrounded by the militants for the last two days.

"The situation is critical and outrageous. The OSCE representatives did not arrive as promised yesterday, [and] the guys are almost completely surrounded,” Sinkovsky told the newspaper.

“[We’re] waiting for reinforcements from the General Staff or OSCE representatives,” said Sinkovsky, who said he was in contact with all of the soldiers on the ground.

“Support has still failed to come. Fighting is underway. There are prisoners. [The bodies of killed] and [wounded soldiers] cannot be evacuated from the checkpoints. The roads have been mined. All the rest [of my troops] are sitting, watching, waiting for the battalion to be killed."

According to Sinkovsky, fighting is raging at all of the defensive positions that are held by his battalion.

"The guys are holding their positions, defending them bravely, but ammunition is running out,” Sinkovsky said.

“There is almost no food left. Morale is weakening due to [the command’s] attitude - no reinforcements, no OSCE representatives. Attacks and firefights are under way. The guys on the ground are not going to retreat and give up. But the enemy forces are much stronger. We’re getting exhausted.”

Sinkovsky said the Ukrainian troops are still hoping for assistance from the General Staff, reinforcements, a counter-offensive, or the deployment of OSCE representatives to report about the situation to the whole country.

"But it is unacceptable just to watch [my troops] dying," Sinkovsky said.

When contacted by UNIAN, the headquarters of the government’s Anti-Terrorist Operation was not able to clarify what measures have been undertaken to help the 40th Battalion.

"I have no information about the 40th Battalion now," ATO spokesperson Andriy Lysenko said when describing the general situation in Debaltseve.

Earlier it was reported that fierce fighting continues in the areas around Debaltseve, while the Ukrainian military claimed to have regained control over the village of Logvinovo to the north of Debaltseve, on the road leading into the town. A military spokesman claimed food and ammunition was being sent to the soldiers in Debaltseve, and rotations of combat units were underway.

Meanwhile, journalist Olga Germanova said in a posting on Facebook made just before 1400 Kyiv time that she had received a plea for help from Ukrainian soldiers in the village of Komuna, immediately to the west of the town of Debaltseve.

She said the soldiers had told her that they could continue to hold their positions in Komuna for a maximum of 12 more hours, and that they feared that they would all be killed if no reinforcements arrived to help them.

And according to a Facebook posting made earlier on Tuesday by Ukrainian journalist Andriy Tsaplienko, the Russian-backed militants have seized the railway station and the local police department in Debaltseve itself.

The fact that there was fighting at the railway station was confirmed by ATO spokesperson Lysenko at a briefing in Kyiv on Tuesday.

"The Ukrainian military control the village of Logvinovo, and also partially control the road to Debaltseve. There is fierce fighting on the outskirts of the city now, there is a tense situation in the area of the railway station, but our military are holding their positions," Lysenko said.

He denied reports in some Russian media that the Ukrainian military have allegedly abandoned their positions near Debaltseve due to losses.

"The enemy is losing more and more people, as well as equipment," Lysenko said.

Photographs have been posted on the Internet allegedly showing Ukrainian army equipment abandoned in Debaltseve. UNIAN is unable to confirm their veracity.

Earlier, the Ukrainian military denied reports that its troops in Debaltseve had been surrounded by the Russian-backed militants. However, journalists and a team of OSCE observers have been unable to reach the town, with both sides saying it is not safe for them to go there.

A ceasefire in the Donbas was supposed to have come into effect on midnight on Sunday, but Russian-backed militants have continued to attack the Ukrainian forces in the town, according to multiple reports from the area.

Representatives of the militant organizations in the Donbas, whose leaders signed an agreement on a ceasefire in the Donbas at last week’s peace conference in Minsk, said on Monday that Debaltseve is not covered in the agreement, as it is not specifically named in the text.

The failure to secure a ceasefire has stalled the withdrawal of heavy weapons from the front line between the two sides. Both sides were supposed to have pulled back heavy weapons within 48 hours of the ceasefire, but neither has, and fighting has continued.