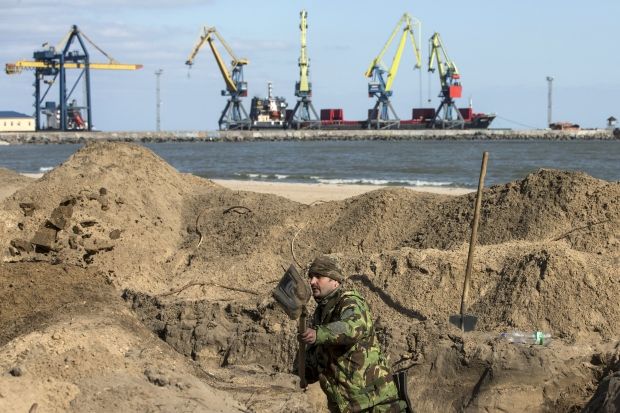 Commander of the 8th separate company of the Right Sector Ukrainian military volunteer corps Andriy Cherven said that his troops had been ordered to leave the town of Shyrokyne outside Mariupol before March 27, and the anti-terrorist operation zone itself before April 1.

According to him, the order says that all the troops that are not part of the Armed Forces of Ukraine and the National Guard should be withdrawn from the zone. Cherven added he couldn't disobey the order.

"Let people protect us politically, and we'll continue protecting them physically," he said.

The chief of the staff of the 8th Aratta [named after an ancient civilization that allegedly lived in the Danube and Dnieper region during the Neolithic period] separate company of the Right Sector Artem Lutsak (nom de guerre 'Doctor') confirmed this information. He said that Cherven had been presented with an ultimatum that either the volunteer corps "become subordinate to the official military structure or that they leave the ATO zone." According to Lutsak, Right Sector volunteers are now leaving the red zone and heading for their base.

"They're depriving us of our right to fight. Immobilizing the volunteer battalions is a betrayal," Lutsak said. He said that the volunteers fight more effectively than the regular troops, as their motivation is stronger.

"We do what they're unable to do," he added.

The Azov and Donbas battalions and the National Guard are now stationed in Shyrokyne, Press Officer of the M sector Oleh Sushinsky said. Speaking about the Right Sector fighters, he said: "They are civilian people who believe they are helping the Donbas battalion."

Sushinsky confirmed that volunteers had been offered either to join the regular ATO forces or to leave the military zone.

"They want to fight, but it's not right. There are civilians and there are military. If they consider themselves to be professionals, let them join [the army] officially," he added.