OSCE: up to 60% of buildings in Shyrokyne destroyed 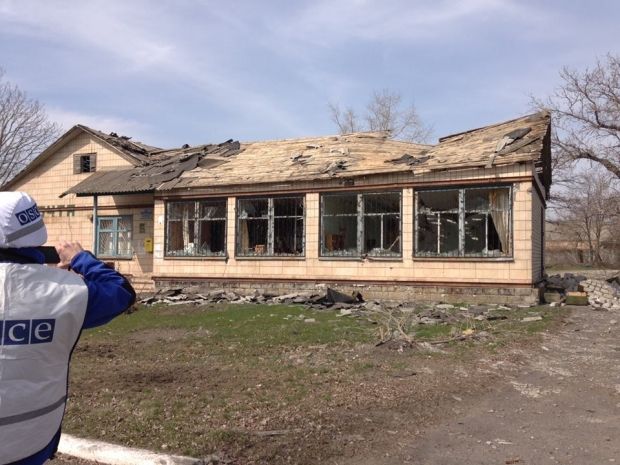 Up tp 60% of buildings in Shyrokyne, Donetsk region, destroyed by shelling / Photo from OSCE SMMU Facebook

This was announced by Deputy Chief Monitor of the OSCE Special Monitoring Mission (SMM) to Ukraine Alexander Hug.

"Today the SMM was once again able to reach ‎Shyrokyne, this time entering the village. But what we saw today in Shyrokyne was catastrophic. Not one building our team saw was untouched by live fire or shrapnel damage," Hug wrote on the OSCE SMMU official Facebook page.

According to him, 50-60% of the buildings in the village have been destroyed.

"The people still living in Shyrokyne are in a very difficult condition. Their houses are destroyed, they don't have water or electricity," he wrote.

However, he praised that the parties to the conflict were able to agree on a temporary ceasefire in near Shyrokyne.

"It is a good sign that both sides were able once again to hold the fire. This needs to continue now, and the SMM will go back to Shyrokyne and the neighbouring villages up to the Ukrainian-Russian Federation state border on a regular basis to monitor the cease-fire. The fact that, for the most part, a ceasefire held here for two days now gives us hope that all sides can come to terms to also continue sticking to the ceasefire throughout the entire conflict zone," he wrote.

THe OSCE SMM to Ukraine wrote on March 26 in its daily report for March 25 that it had facilitated a local ceasefire the area of Shyrokyne, "which had been holding throughout the day."

Overlooking Shyrokyne from the main highway, the SMM said they had observed damaged houses in the village. The SMM then proceeded to the border crossing point in Novoazovsk, where "border guard" personnel on the Ukrainian side ("DPR"-controlled) stated that the border was open.

According to the OSCE SMM, vehicles were lined up on the Ukrainian side to cross into the Russian Federation. Also on the Ukrainian side, facing west, a convoy of at least 10 covered trucks was lined up. The SMM then returned to Mariupol, passing through an area close to Shyrokyne, where the local ceasefire was still holding.

In Mariupol the SMM met a group of 12 internally displaced persons (IDPs) from Shyrokyne, five women and six men, and a girl. The adults were mostly middle-aged. They stated that most IDPs arrived in Mariupol between February 1 and February 15, but the last few arrived on March 15 after walking from Shyrokyne. According to the IDPs, 40 children from Shyrokyne are IDPs in Mariupol. "One female interlocutor said that schools had provided psychological counselling for students traumatized by the fighting and those having difficulties adjusting in Mariupol. However, several of the female interlocutors stated that some parents keep their children out of school because they fear that this new challenge will further cause stress for their children who already experienced the fighting in Shyrokyne and forced departure from their homes," the OSCE SMM wrote.

The OSCE SMM also reported about the presence of battle tanks belonging to Russian-backed militatns in the zone of the inspection.