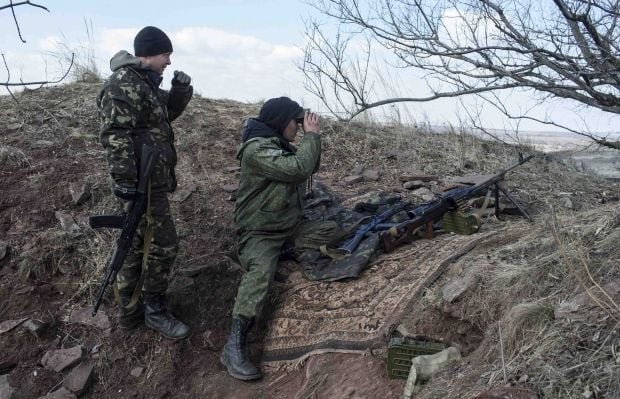 According to the report, on March 29, at about 1930 a group of militants came from the occupied territory to the destroyed bridge over the Siverskiy Donets River near the village of Triokhizbenka and fired automatic weapons and grenade launchers on a fortified position of the Ukrainian armed forces.

"After there was return fire the militants withdrew, but two Ukrainian soldiers were injured. One of them was hospitalized in a serious condition, the doctors are fighting for his life," the report reads.

"Militant attacks were recorded in several areas overnight. Near the village of Krymske Ukrainian troops were periodically attacked by the Russian-backed militants from the village of Sokolnyky," Moskal said.

"The detonation of mines was heard on the Bakhmutka highway, and in the village of Stanytsia Luhanska the militants fired small arms several times at night. We have no information about casualties," Moskal said.

Moskal said that on March 29 maintenance crews were able to repair weather damage to the energy supply system in the village of Novotoshkivske, but the village of Triokhizbenka remains without power.

"In addition, there is no power in the village of Stanytsia Luhanska and seven surrounding villages that are provided with power from transmission lines coming from the occupied territories,” Moskal said.

“As a result, the central heating and water supply systems do not work, and there are problems with mobile communications. It is unknown when the electricity can be restored there.”