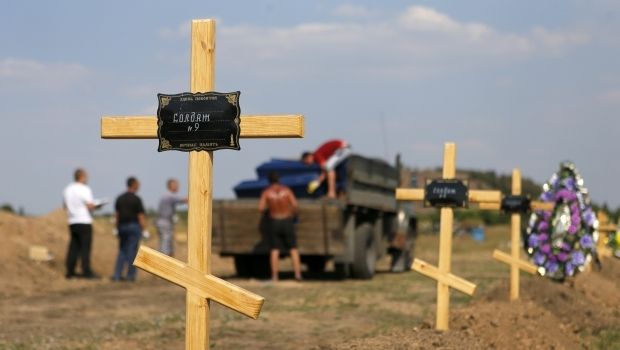 Yashin is working to reconstruct a report by murdered Russian opposition leader Boris Nemtsov on Russia’s covert war against Ukraine.

"At the end of January the relatives of dead soldiers informally asked Nemtsov to put pressure on the Ministry of Defense to help them get the payments," he said.

Russian police seized Nemtsov’s computer in a raid on his apartment shortly after he was gunned down in front of the Kremlin walls in Moscow on February 27. However, his associates later said that enough copies of information he had been collecting on the deaths of Russian soldiers in Ukraine remained for them to be able to reconstruct a report the opposition figure was said to be working on when he was killed.

According to Yashin, large numbers of Russian soldiers were killed in the east of Ukraine in two periods of time.

"The first wave of coffins went to Russia last summer, when the Ukrainian army went on the offensive and liberated one after the other the towns of the Donetsk and Luhansk regions. The offensive was halted after the direct intervention of the Russian army," Yashin said.

"When it became impossible to hide the presence of the Russian military in the conflict zone, the Russian Defense Ministry invented a story that they went to fight during their legal vacation," Yashin said.

According to Yashin, this information could not be hidden and journalists managed to shed light on the situation.

"However, many people were surprised that an independent investigation was opposed not only by the authorities, but also by the families of the dead soldiers. According to Nemtsov’s sources, this fact can be explained that the relatives received RUB 3 million as compensation. At the same time, they signed a nondisclosure agreement under threat of criminal prosecution," he said.

"The second big wave of coffins went to Russia in January and early February 2015, during the conflict in Debaltseve,” Yashin said.

"But this time the relatives did not receive any compensation, as now before going to the Donbas the soldiers did not ‘go on vacation’, as before, but were ‘dismissed from service,’" Yashin said.

"In practice, the relatives have not received any compensation this time. Commanders shrugged and referred to the authorities. The relatives couldn’t officially seek compensation, because the dead soldiers weren’t formally Russian servicemen," he said.

As reported earlier, Yashin said that the report of Nemtsov about Russia's role in the conflict in Ukraine, over which the politician was working before his murder, would be published by mid-April.