While fighting in Shyrokyne stopped, new and heavy fighting broke out in and around Donetsk airport on April 12, the OSCE Special Monitoring Mission (SMM) to Ukraine said. 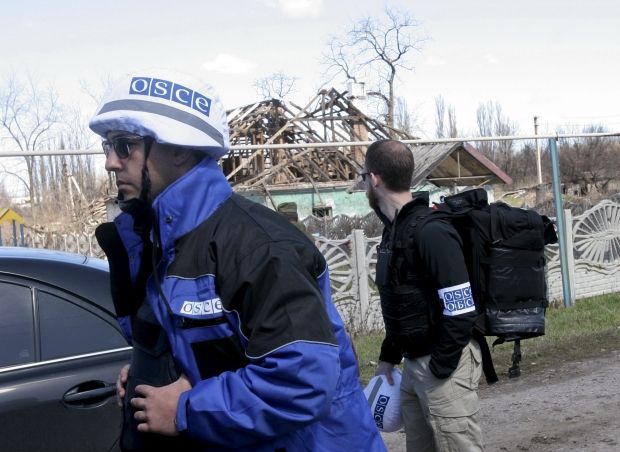 OSCE SMM Chief Monitor, Ambassador Ertugrul Apakan, expressed dismay at the resumed violence in the eastern Ukrainian town of Shyrokyne on Saturday, and in and around Donetsk airport on Sunday, and called upon all sides to exercise restraint.

According to him, the renewed fighting followed three days of calm in Shyrokyne facilitated by the SMM, which allowed monitors to re-enter the village on April 9 and April 10 to assess the humanitarian needs of the remaining local population.

"The SMM monitors had observed and recorded severe destruction in the town, as well as the presence of vast amounts of unexploded ordnance," Apakan said.

On Saturday evening the OSCE monitors heard the sound of renewed engagement between forces in Berdianske and Shyrokyne, according to Apakan.

"While fighting in Shyrokyne stopped again after three hours Saturday night, new and heavy fighting broke out today [Sunday] in and around Donetsk airport. SMM monitors are present to observe the developments and will report accordingly," he said.

He added that he regretted that the so called "Donetsk People's Republic" forces had prevented SMM monitors from entering Shyrokyne earlier on Saturday and again on Sunday.

Apakan called upon all sides to exercise maximum restraint and to honor the commitments undertaken under the Minsk agreements. "Our hope is of course for a long-lasting and comprehensive ceasefire that will bring an end to the spiral of violence that has destroyed so many lives and infrastructure," he said.