There was a considerable increase in the number of attacks by illegal armed groups on the positions of Ukrainian troops in the anti-terrorist operation (ATO) zone on April 26. 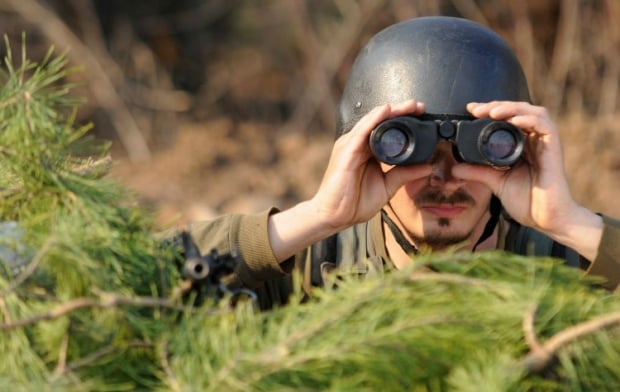 From 0000 to 1800 Kyiv time on Sunday, pro-Russian militants shelled the Ukrainian troops along the entire line of contact 46 times, using mainly small arms, though mortars and artillery systems were also engaged, the ATO press center reported on Facebook.

"Militants opened fire on the position of Ukrainian troops near the village of Shyrokyne in Donetsk region 13 times, using, among other things, 120mm-caliber mortars and 122mm-caliber artillery systems, a tank and an anti-aircraft system. The village of Pisky [near the destroyed Donetsk airport] and the areas around it were shelled from 122-mm caliber artillery systems and a tank, and 120mm-caliber mortars were used five times," the report said.

"A short fight took place near Pisky at about 5 o'clock in the morning [on Sunday], but the ATO forces were able to repel the enemy's attack," the press service said.

Different types of weapons were used to shell the Ukrainian troops near the town of Avdiyivka, and the villages of Opytne and Kirove.

"Our units have detected flights of two drones in the skies not far from the town of Adviyivka and the village of Hranitne," the report said.