There was a huge rise in the number of Russian-backed militant attacks on Ukrainian forces in the Donbas over the May holiday weekend, with hostilities back to the level they were before a ceasefire was supposed to have come into effect on February 15. 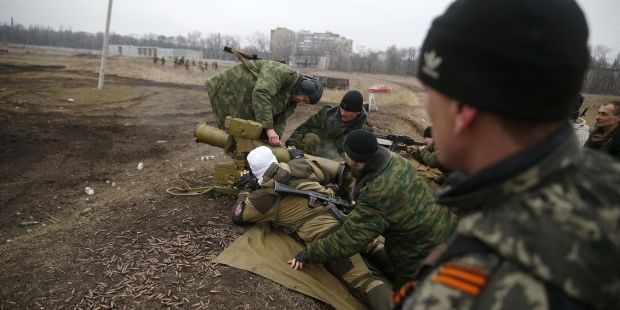 The [militants] carried out 45 attacks from 1800 to midnight [on Sunday], the press center of Ukraine’s Anti-Terrorist Operation [as Ukraine describes its counterinsurgency operation] said on its page on Facebook on Monday.

“The number of ceasefire violations over the past day was 95, which is almost at the level seen before the conclusion of the [peace] agreements in Minsk [on February 12.] The enemy is no longer hesitating to fire on our positions several times a day with heavy artillery and rockets, trying to provoke Anti-Terrorist Operation forces into giving the appropriate response.”

The huge increase in attacks came just days after Ukrainian President Petro Poroshenko warned that the combined Russian-militant forces might launch a fresh offensive in mid-May.

“We keep getting more evidence and information proving that the aggressor will commence a military offensive in the second half of May,” Poroshenko said on April 30.

“[But] I don't want to frighten anyone, and you should know that the country is capable of protecting its citizens," the Ukrainian president said.

Perhaps adding credence to the president’s claim, there have been recent reports of sightings of large columns of military vehicles moving around eastern Ukraine, and in areas of Russia close to the Ukrainian border. That, and the rising number of attacks by militants, leads many in Ukraine to fear that a fresh militant offensive might be just days or weeks away. The militants have said several times they intend to take more territory, and have on many occasions accused Kyiv of violating the Minsk peace agreements.

The most serious upsurge in attacks on Ukrainian forces occurred on Sunday, the ATO press center said.

The militants fired heavy 122mm caliber artillery five times on Ukrainian army positions near Avdiivka, three times on the village of Vodyanoye, and once in the vicinity of the villages of Opytnoye, Shyrokyne, and Kamenka.

In Luhansk region, according to the press center report, the militants fired 152mm caliber artillery at fortified positions of the Ukrainian military in the area of ​​the village of Novobakhmutovka, and attempted to carry out a sabotage attack: "At midnight ATO forces in positions near the of village of Novoselovka successfully repelled an attack by a sabotage and reconnaissance group of 10 enemy fighters," the press center said.

According to the Minsk peace agreements of February 12, weapons of caliber over 100mm were supposed to have been withdrawn out of range of the front line weeks ago by both sides. However, the OSCE, which is charged with overseeing the implementation of the supposed ceasefire and weapons pullback, has noted numerous violations of this point of the agreement by both sides.

The OSCE has also complained that it is not able to freely move around militant-held territory, either to monitor Ukraine’s border with Russia or to ensure heavy weapons remain at designated storage sites.

On Ukrainian-held territory, the OSCE has complained of being held up at Ukrainian army checkpoints as soldiers asked about the nationality of OSCE observers.

Despite Russia’s now-obvious direct participation in the Ukraine conflict, there are still 24 Russian citizens on the OSCE’s observer mission, according to information from the European security organization.