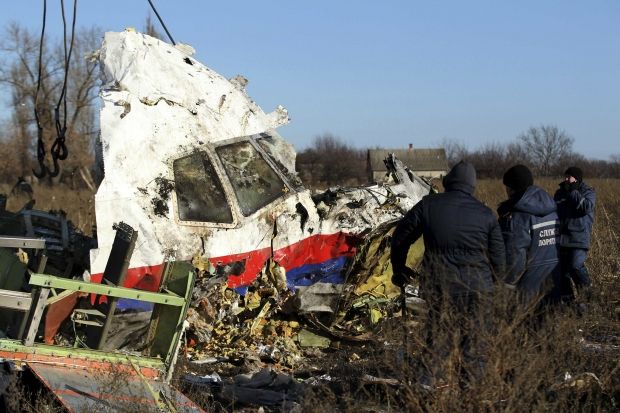 But the report includes images faked by the General Staff of the Russian Federation, Apostrophe said, quoting data from the Security Service of Ukraine (SBU) published in July last year.

The Russian newspaper Novaya Gazeta published the leaked report by Russian engineers on the MH17 crash. According to the report, the aircraft was indeed hit by SAM Buk-M1 missile, but from territory supposedly controlled by Ukrainian military.

Earlier the Russian Defense Ministry claimed MH17 had been shot down by a Ukrainian Su-25 ground attack aircraft, and released what it said was a satellite image showing an aircraft firing a missile at the passenger jet. That image was quickly debunked as fake, but not before it was republished in a number of Western media.

According to the chief of the department of counterintelligence defence of state interests in the field of information security of the SBU, Vitaliy Naida, it took the General Staff of the Russian Federation four days after the disaster to fabricate evidence and falsify satellite data in order to accuse Ukraine of being responsible for the crash of the aircraft.

According to Naida, a comparative analysis of Russian space imagery data has been carried out based on digital satellite data. He said the "Russian evidence" has many signs of forgery and retouching.

In addition, some of these pictures were shot by Russian spy satellites at another time, long before MH17 was shot down over Ukraine on July 17 last year, Naida said.

He said one fake piece of evidence was a “satellite image” from Russian General Staff, which was actually from July 14, 2014 and which featured a Ukrainian radio technical battalion, military unit A-0194, deployed near the village of Teplychne, Luhansk region.

However, the SBU that the said battalion, which at the time was redeploying under militant fire to Kharkiv region, did not possess weapons such as the Buk surface-to-air missile system.

"The battalion was withdrawing equipment and personnel under attack from the terrorists. The same equipment that was damaged and remained in the place of deployment was depicted in Russian photos as the location of Buk the system" Naida said.

"At the time of the terrorist attack, the territory where the unit had been was under the control of pro-Russian terrorist organizations. Therefore, the claims that Ukrainian Buks were stationed in this area are completely made up," Naida said.

There is also another fake "satellite image" with a diagram of the site near the village of Zaroshchinske, Donetsk region, which the General Staff of the Russian Federation Ministry of Defence identified as the alleged location of a Buk-M1 air defence missile system, Naida said.

"The weight of a SAM Buk M1 system with all equipment is more than 32 tonnes. None of the Russian photos - neither large, nor small – show tracks of a Buk M1’s entry to the field, which was sown with wheat. In the picture a few days later, these tracks were still not visible," Naida said.

The field, located in the south-east of the intersection No. 2 (indicated by photographs dated July 16) - Field No. 1 – had been completely harvested the day before the alleged deployment of the Buk to the site. But the Russian pictures show the field only partially harvested, and this despite the fact that the photograph was dated July 17, according to Naida.

The same evidence (unharvested fields and no Buk launcher tracks) is clearly visible on other satellite image of the Russian General Staff, Naida said.

Naida said the materials released by the Russian General Staff, in general, do not correspond to reality and are aimed at covering up the involvement of the Russian armed forces in the launch of the Buk-M1 missile that shot down MH17.