US expert: OSCE in Ukraine hamstrung by Russian members of monitoring team 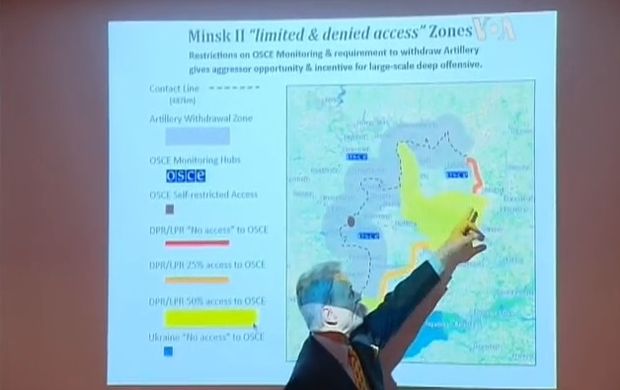 Screenshot from video of Karber presentation

Karber made the claim during his presentation of the report "Beyond Minsk II: Prospects for a new Russian offensive," according to the Voice of America.

"The OSCE was never intended to oversee military operations. I characterize them more as marriage counselors rather than divorce lawyers,” Karber said.

“The idea is that they will do their job, to insist on inspections and fast reports... They are just not able to do that because the team includes the Russians. When I was in Mariupol, the number of Russian observers was much higher than [the number of] representatives of other countries. They went near the positions of the Ukrainian military and input the coordinates of their location in their mobile phones. The OSCE is not an independent body."

Karber presented a map of the inspections agreed by the OSCE, which clearly indicates that the inspectors did not have access to the Russian-Ukrainian border, through which the main transfer of Russian military equipment and soldiers has been carried out to the Donbas.

According to OSCE information, its monitoring mission in Ukraine includes 24 Russian citizens. The organization says all team members work solely on behalf of the organization, and not their home countries.