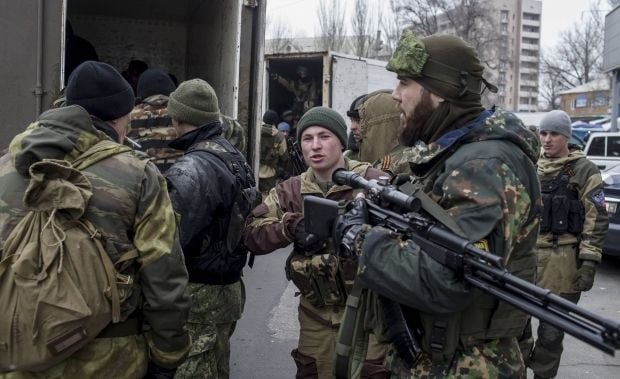 In particular, they attacked areas near the village of Shyrokyne several times, opening fire from grenade launchers, anti-tank missile systems and small arms, the ATO press center reported on Facebook.

In addition, they used a 120mm-caliber cannon artillery systems to shell areas near the village of Novoselivka-2 and Shyrokyne. A sniper also worked there.

There was a skirmish between Ukrainian soldiers and pro-Russian militants near the town of Schastia in Luhansk region. The enemy used 120mm-caliber mortars, an AGS-17 automatic grenade launcher and small arms.

According to the ATO press center, militants shelled Ukrainian positions to the northeast of the village of Lozove in Donetsk region, using 152mm-caliber artillery systems and 120mm-caliber mortars. The Butivka coalmine also came under fire, being the target for automatic grenade launchers, heavy machine guns and small arms.

The enemy is not only shelling the positions of the Ukrainian military, but also actively making an aerial reconnaissance. Their drones were spotted in the sky over the village of Vodiane and the Ukrainian-controlled city of Mariupol.

Meanwhile, soldiers of an infantry battalion of the Armed Forces of Ukraine on Saturday completed three-day repairs to a water tower in the village of Berdianske, which is located a few kilometers far from Shyrokyne.