Russia's army is massing troops and hundreds of pieces of weaponry including mobile rocket launchers, tanks and artillery at a makeshift base near the border with Ukraine, a Reuters reporter saw this week. 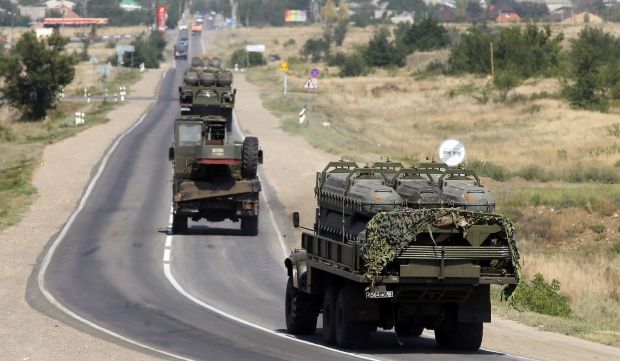 Many of the vehicles have number plates and identifying marks removed, while many of the servicemen had taken insignia off their fatigues. As such, they match the appearance of some of the forces spotted in eastern Ukraine, which Kyiv and its Western allies allege are covert Russian detachments, and also the Russian troops known to have invaded and annexed the Ukrainian territory of Crimea in March 2014.

The scene at the base on the Kuzminsky firing range, around 50 km (30 miles) from the border, offers some of the clearest evidence to date of what appeared to be a concerted Russian military build-up in the area.

Earlier this month, NATO military commander General Philip Breedlove said he believed the separatists were taking advantage of a ceasefire that came into force in February to re-arm and prepare for a new offensive. However, he gave no specifics.

Russia denies that its military is involved in the conflict in Ukraine's east, where Moscow-backed separatists have been fighting forces loyal to the pro-Western government in Kyiv.

Russia's defense ministry said it had no immediate comment about the build-up. Several soldiers said they had been sent to the base for simple military exercises, suggesting their presence was unconnected to the situation in Ukraine.

Asked by Reuters if large numbers of unmarked weaponry and troops without insignia at the border indicated that Russia planned to invade Ukraine, Kremlin spokesman Dmitry Peskov said during a conference call with reporters:

"I find the wording of this question, 'if an invasion is being prepared', inappropriate as such."

The weapons being delivered there included Uragan multiple rocket launchers, tanks and self-propelled howitzers - all weapon types that have been used in the conflict in eastern Ukraine between Kyiv's forces and separatists.

The amount of military hardware at the base was about three times greater than in March this year, when Reuters journalists were previously in the area. At that time, only a few dozen pieces of equipment were in view.

Over the course of fours days starting on Saturday, Reuters saw four goods trains with military vehicles and troops arriving at a rail station in the Rostov region of southern Russia, with at least two trainloads traveling on by road to the base.

A large section of dirt road leading across the steppe from the Kuzminsky range to the Ukrainian border had been freshly repaired, making it more passable for heavy vehicles.