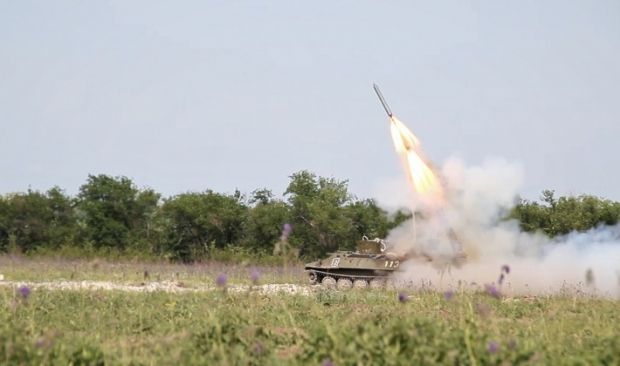 Russian-backed militants are testing Zmey Gorynych mine clearance system outside Luhansk on May 27, 2015 / Photo from a separatist website

However, military experts note that the military hardware "Zmey Gorynych," nicknamed after the three-headed fire-breathing dragon-like beast from Russian folklore, is used by the Russian Armed Forces, and Russia is its major operator. Such equipment has never been supplied to Ukraine, thus, Ukraine's armed forces do not use it.

A source at Ukraine's Defense Ministry told UNIAN that "supervisors" from the Russian special forces were trying to make separatists withdraw that material from their website, however, it is still available at the moment.

According to Army Recognition, a global military army online magazine, the UR-07 clearance system is mounted on the chassis of BMP-3 infantry armored vehicle. Fitted with an extensive support demining UZP UZP-06-06D, it may create a way through a minefield of an area between 340 and 1,000 m long and up to ten meters wide. Its explosive charge is able to destroy all types of mines.

The mine clearance charge is a long cable with explosives. The cable is attached to a launch system over several hundred meters. After firing, the cable and explosive charges fall to the ground, explode and destroy mines within a diameter of several meters. In a few seconds a safety corridor is created in a minefield, which allows soldiers and combat vehicles to cross the field safely.

Mine-clearing charges appeared for the first time in the U.S. Army during World War II. These devices have been actively used in Vietnam and Iraq in 1991. However in 2003, the U.S. military in Iraq had abandoned that type of weapon, although they were part of the offensive troops.

Today, all NATO countries have such vehicles. The first Russian remote-controlled mine clearance vehicle UR-67 was commissioned in 1968, followed by the UR-77 in 1978.