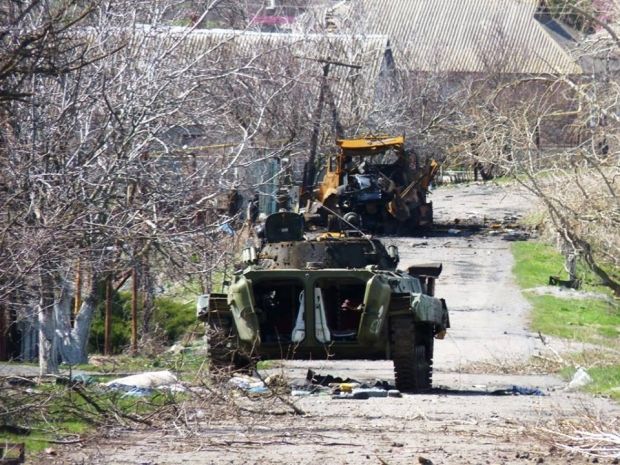 Russian-backed militants continue shelling the village of Shyrokyne near Mariupol / Photo from facebook.com/ato.news

"The situation in the ATO zone remained stable, however it was tense due to threats of escalation in some sectors. Militants were shelling the town of Schastia in Luhansk region, using automatic grenade launchers, small arms and mortars of various calibers, including 120mm-caliber systems," the ATO press center said.

What is more, the town of Maryinka in Donetsk region was attacked by mercenaries three times in the first half of Sunday; they used 120mm-caliber mortars and grenade launchers.

The enemy was firing on the village of Shyrokyne near the Ukrainian-controlled city of Mariupol from 122mm-caliber artillery systems and mortars the whole day on Sunday. The village was also under sniper fire.

Ukrainian troops near the village of Hranitne were attacked by anti-tank systems.

The enemy continued conducting active aerial reconnaissance in the ATO zone. An enemy drone was downed by Ukrainian troops near the village of Valeryanivka in Donetsk region.

As UNIAN reported earlier, personnel of the OSCE Special Monitoring Mission to Ukraine and the Joint Centre for Control and Coordination of the Ceasefire and Stabilization of Parties' Demarcation Line came under militant fire in Donbas on Sunday. The fire came from the village of Vesela Hora, which is controlled by the so-called Luhansk People's Republic. No casualties were reported.

On Sunday, presidential administration speaker for ATO issues Oleksandr Motuzianyk reported that no Ukrainian soldiers were killed in the ATO zone on Saturday, June 6, while eight were wounded.