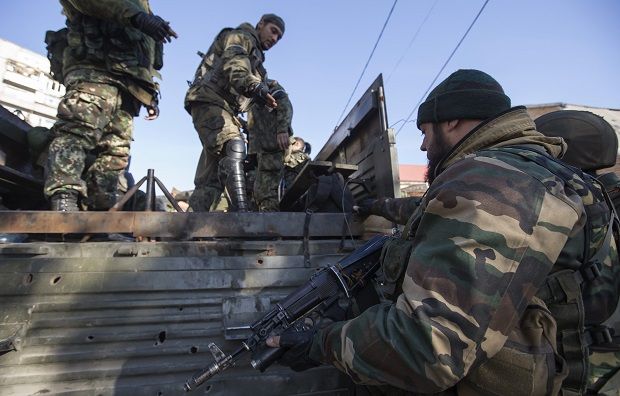 "In the evening, the activity of the Russian-backed militants increased. By midnight, they had attacked Ukrainian army positions about 30 times," the report says.

In the area of Donetsk, the militants continued to fire 120mm mortars and 122mm howitzers on the positions of the Ukrainian troops near the villages of Pisky, Opytne and Starohnativka.

Weapons over 100mm in caliber were supposed to have been withdrawn out of range of the front line weeks ago, according to the February 12 Minsk peace agreement implementation deal. However, the OSCE, which is charged with monitoring the withdrawal, says neither side has complied fully. Furthermore, the OSCE has limited or no access to large parts of the territory occupied by the Russian-backed militant organizations in the east of Ukraine.

The militants fired 120mm mortars and 122mm howitzers seven times on the village of Shyrokyne from Monday evening, the headquarters also reported.

It was also reported that after midnight the militants fired mortars and 100mm caliber artillery systems near the village of Shyrokyne, as well as the town of Zolote in Luhansk region, and the village of Orikhove not far from Artemivsk.

In addition, the militants fired small arms and rocket-propelled grenades on the villages of Pisky, Opytne, Stanytsia Luhanska. A sniper was working in the town of Maryinka.

"During this period, the Ukrainian army recorded reconnaissance overflights by enemy drones along the demarcation line," the ATO headquarters said.