Russian-backed militants in the Donbas attacked Ukrainian army positions 90 times from Thursday evening to Friday morning, the press center of the Anti-Terrorist Operation said on its Facebook page on Friday. 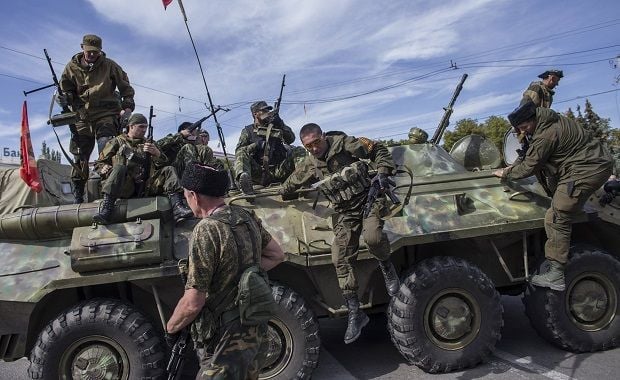 "The militants fired Grad multiple rocket launchers, artillery, combat vehicles, small arms and rocket-propelled grenades on the positions of the Ukrainian armed forces along the demarcation line," the report says.

The level of attacks reported by the Ukrainian military in recent days has been similar to that which it reported during the heavy fighting ahead of, and after, a ceasefire was supposed to have come into effect in eastern Ukraine on February 15.

According to the report, the militants intensified their attacks in the evening. In total, they attacked Ukrainian army positions and residential areas 55 times during the night.

According to the Minsk peace agreements of February 12, both sides were supposed to have moved weapons of caliber greater than 100mm out of range of the front line. However, the OSCE, the organization charged with monitoring the weapons pullback, has noted numerous violations of this provision of the peace deal. In addition, OSCE monitors are prevented by the Russian-backed militants from accessing large swathes of the Ukrainian territory they control, including areas up to the front line.

"Not far from Donetsk, the militants fired small arms and 82mm mortars on the villages of Pisky and Opytne, as well as the towns of Krasnohorivka and Maryinka. After midnight, they fired on the town of Zolote and the village of Sokilnyky in Luhansk region," the headquarters said.

However, the Russian-backed militants were most active in the town of Maryinka. They attacked Ukrainian army positions at least ten times, using 120mm mortars, infantry fighting vehicles, rocket-propelled grenades and small arms.

Under the cover of their assault groups, the militants tried twice to oust the Ukrainian armed forced from their positions. However, the enemy suffered losses and had to retreat, the headquarters said.