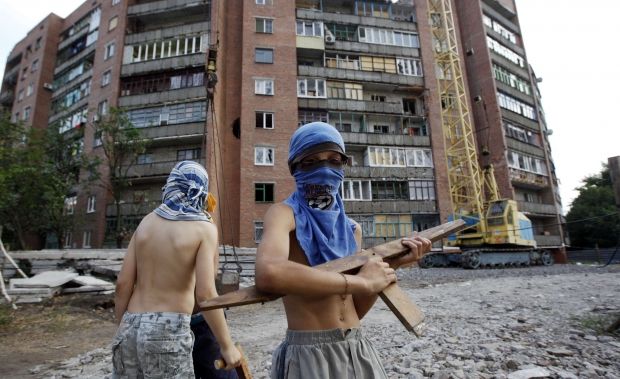 Patriotic Donbas boss Yuriy Tsiupka - a 53-year-old who disdains the Ukrainian nationalists who fight as volunteers across the war zone - said he only wanted to reinstate the old Soviet tradition of teaching army skills in school.

"We decided to go back to what we had in the Soviet Union," the fatigues-clad Tsiupka said.

"We will also teach them to dig trenches, to work the terrain," he said.

About 20 kids between the ages of 14 and 19 are still taking training lessons in the town of Khartsyzk - home to 60,000 people prior to the breakout of hostilities and a flood of migrants for safer regions that followed - in the first weeks of their summer break. Some of them are learning basic drills, while others are taking first aid lessons provided by the rebel command.

For example, Denis is only 14 but he already knows how to assemble a Kalashnikov rifle. Denis is a child soldier in the making - eager to join the pro-Russian militants fighting Ukrainian troops.

"If I was an adult, I would fight," the skinny boy with a disheveled crew-cut said in a war-scarred town deep in the heart of the rebel-run east of the ex-Soviet state.

"I want to see war, to learn how to shoot, to see the tanks," he said with an air of excitement as two adult rebels stood nodding at his side.

Tsiupka said more and more schools across the heavily Russified region were running such military clubs. He said there were at least four others in surrounding towns alone.

But not all of them are providing simple training.

Some have seen their pupils actually join the Khartsyzk separatist units stationed in the mine-strewn fields that stretch 20 kilometers (12 miles) east of the rebel stronghold city of Donetsk.