The video captures the moments of combat action as the militants from the so-called Luhansk People’s Republic, reinforced with the APCs, tried to attack the Ukrainian troops in Donbas. 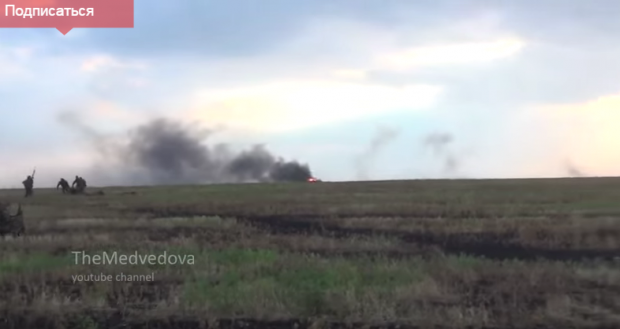 In the beginning of the video clip, initially posted on YouTube channel TheMedvedova on August 11, the militants are moving forward across the field, behind the APCs. Then, a tank or a self-propelled artillery (SPA) piece, presumably of the Ukrainian forces.

The video also recorded several attempts by militants to fire the grenade launchers on this military hardware. Possible destruction of a presumably Ukrainian military equipment cannot be confirmed. In the video, a number of fire outbreaks and heavy smoke near the tank (SPA) is recorded, but this may as well be a smokescreen released by crew under enemy fire.

One can only definitely say that during a failed attempt to attack the Ukrainian positions, the militants have lost one armored personnel carrier, which is burning down in the video. In addition, the wounded are seen as they are being evacuated from the battlefield.

It should be noted that there is no information on where and when the filmed events took place.