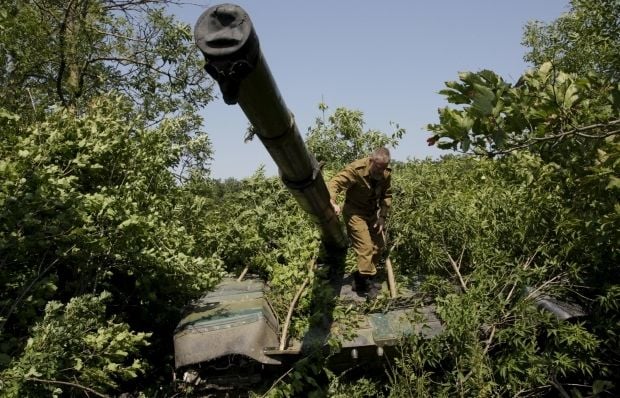 Militants reduced the use of large-caliber weapons, though artillery systems were used twice, mortars 12 times, and grenade launchers 30 times.

Despite this, the situation in the ATO zone on Saturday evening remained stable, the press center said.

"Illegal armed formations have reduced the use of mortars and artillery systems whose caliber is more than 100 mm, and fired mainly from small arms as acts of provocation," it said.

However, there were occasional cases of the violation of the Minsk ceasefire from 18:00 local time on Saturday to midnight.

Militants started firing 120mm mortars on Ukrainian troops in the town of Avdiyivka and near Butivka coalmine not far from the separatist-controlled city of Donetsk at about 18:30 and on the town of Krasnohorivka at 21:35 local time.

Ukrainian-defended posts in the village of Stanytsia Luhanska in Luhansk region were attacked three times at about 21:00 on Saturday when the enemy used mortars, grenade launchers and large-caliber machine-guns.

At 23:00 local time, Ukrainian troops in the village of Krymske were attacked by an enemy tank.

Militants used a 120mm mortar to shell Ukrainian positions in the town of Popasna in Luhansk region at almost 20:30 local time on Saturday.

ATO forces deployed near the Ukrainian-controlled city of Mariupol were under provocation fire from small arms at about 20:00 and 22:00 local time on Saturday.