Ukraine's military intelligence revealed a specially equipped cache filled with weapons and explosives near the strategic port city of Mariupol from a warehouse were the contents of Putin’s "humanitarian convoys” are being stored, according to the General Staff. 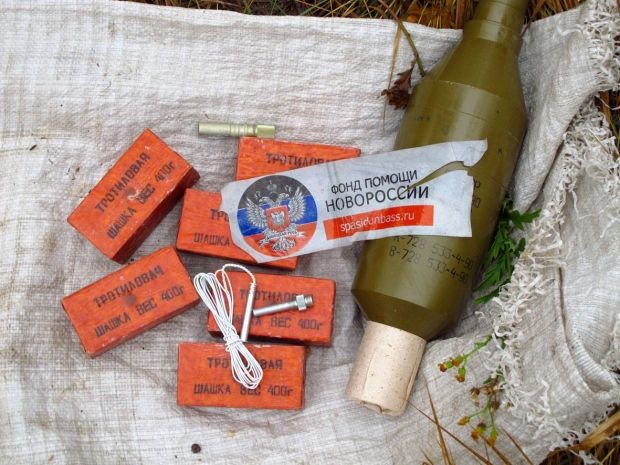 Four kilograms of TNT, grenades to antitank grenade launchers, ammunition and thermobaric ammo, and a number of various fuses were discovered in the cache, the General Staff reported on Facebook.

"Given the peculiarity of the cache, we can say that it was created recently. Given the set of explosives, we can make the assumption that they might have been aimed for making a mine to blow up a passenger bus," reads the statement.

Read alsoSBU Chief: separatism threats in five "hot spots" across UkraineIt is noted that all of these weapons and equipment were packed in white bags of Russia’s "humanitarian" aid, marked with a special adhesive tape "Novorossiya Aid Foundation," which was created and has been active in the Russian Federation.

Read alsoRussia's 34th 'humanitarian convoy' arrives in Ukraine"So, once again we can see that, instead of food, the white trucks have been bringing weapons and ammunition to Ukraine, with the purpose of killing innocent Ukrainians, destroying our country’s infrastructure and make life in Donbas a horror," said the General Staff.