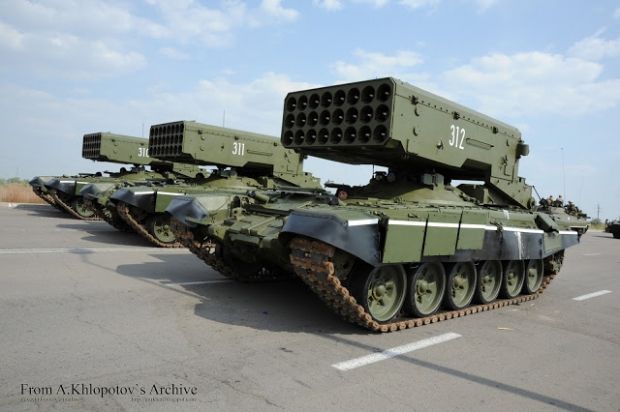 “We are requesting the delegation of the Russian Federation to explain the presence of the TOS-1 Buratino in this training area,” reads the delegation’s statement on Twitter.

The British delegation stresses that this kind of weapon is only produced in Russia, and has never been exported to Ukraine.

Follow the link for the full press release: http://t.co/TDZtLTU5Gopic.twitter.com/5xFyGfV1Xl

As UNIAN reported earlier, the OSCE Special Monitoring Mission to Ukraine discovered a new type of Russian weapons in the militant-controlled territory in Donbas, the kind observers had not yet encountered.

The deputy head of the OSCE SMM, Alexander Hug, has told UNIAN that it was the first time the monitors saw the TOS-1 Pinocchio, a heavy flamethrower system. They found it on the training ground of militants in the village of Kruhlyk near Luhansk.

Read alsoOSCE: Militants still keep heavy weapons near contact line in DonbasPinocchio can be equipped with thermobaric missiles, spreading and igniting a flammable liquid over its target. This type of weapon able to destroy several city blocks.

This system is only produced Russia, and it was not exported to Ukraine before the armed conflict broke out in Donbas, according to the IHS Jane's Group and the Stockholm International Peace Research Institute, which monitors the arms supplies around the world.

According to IHS Jane's and unofficial database on the arms supply of the Stockholm Institute, Russia exported TOC-1 exclusively to Azerbaijan, Iraq and Kazakhstan.