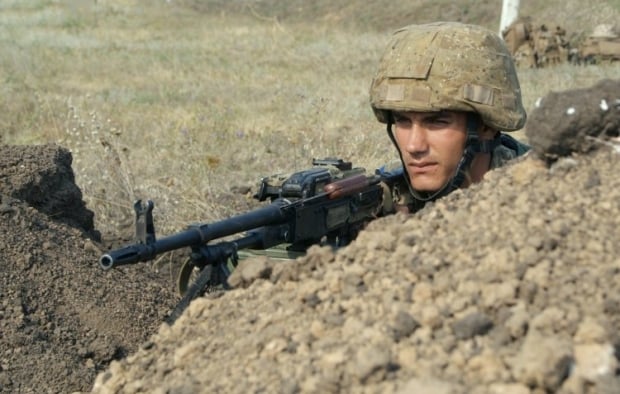 Ukrainian troops use small arms only / Photo from UNIAN

Starting from 05:50 local time on Sunday, they have been shelling Ukrainian troops with the use of grenade launchers, large-caliber machine-guns, and small arms, the ATO press center wrote o Facebook.

"The villages of Troyitske, Pisky and Mayorske were under fire. Terrorists opened fire on Mayorske and the village of Zaitseve [both are located near the militant-controlled town of Horlivka in Donetsk region] from 82mm mortars, which should have been withdrawn from the contact line under the Minsk agreements," the press center said.

What is more, a group of about 20 mercenaries attempted an attack on Ukrainian troops near Mayorske.

"At 13:00 local time, an illegal armed group consisting of about 20 men attempted to storm our positions near Mayorske. When the terrorists approached them at a distance of 150-100 meters without stopping firing on our soldiers, a decision was taken to open backfire from small arms. Simultaneously with the launch of the attack, another militant group started shelling another location of the Ukrainian armed forces. Having been repelled, the enemy took ground and tried to break off combat. At 14:40, they made an attempt to circumvent our positions, but came under fire, suffered casualties, and again took ground. At 15:50 local time, the terrorists opened fire from mortars, which helped them escape with their wounded and dead," the report said.

The Ukrainian armed forces continue strictly abiding by the Minsk accords, as they use small arms only, the press center said.