The combined Russian-separatist forces are firing on the Ukrainian army positions in all directions, the most tense situation is to the west of the city of Donetsk, Head of the press center of the Anti-Terrorist Operation (ATO) headquarters, Colonel Oleksandr Motuzianyk said at a briefing on Tuesday, according to an UNIAN correspondent. 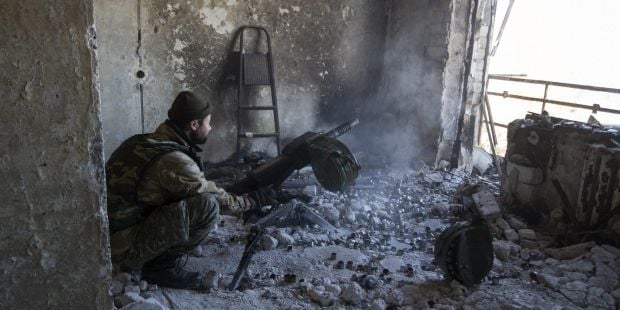 "The enemy was firing 120mm mortars on our positions near the town of Popasna in Luhansk region, while several missiles directly hit the residential areas. The occupiers fired from the village of Molodizhne not far from the militant-occupied town of Pervomaisk," he said.

According to Motuzianyk, in the north-western outskirts of the town of Horlivka, namely in the villages of Maiorske, Novhorodske and the town of Dzerzhynsk, the enemy opened harassing fire toward Ukrainian military, using small arms and grenade launchers. Enemy sniper was also active near Novhorodske.

Read alsoTerrorists launch more attacks overnight in Donbas, use banned 120mm mortarsIn addition, the terrorists were firing on ATO forces from infantry fighting vehicles and anti-aircraft guns for about one hour near the village of Verkhniotoretske.

"However, the situation is most tense in the western outskirts of Donetsk, between the towns of Avdiyivka and Maryinka. The militants have been attacking ATO forces throughout the day. By the evening, their activity has increased in this sector," Motuzianyk said.

In the direction of Mariupol, the militants carried out two provocative attacks in the village of Shyrokyne, using small arms.