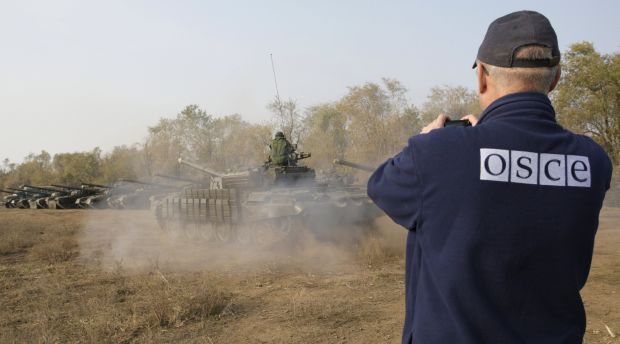 "The SMM revisited an "LPR" [the Luhansk People's Republic] permanent storage site whose location corresponded with the withdrawal lines, where all previously recorded weapons were present. Also in areas beyond the withdrawal lines – but outside storage sites – the SMM observed the following Addendum-proscribed weapons: one main battle tank (MBT) (T-64) at a training area in "LPR"-controlled Shymshynivka (28km south-west of Luhansk) and one MBT – observed by the SMM unmanned aerial vehicle (UAV) – in the area of "DPR"-controlled Bezimenne (30km east of Mariupol)," the OSCE SMM said in its daily update based on information received as of 19:30 local time on December 1, 2015.

The SMM monitored the presence of other hardware. Aerial surveillance imagery available to the SMM revealed a concentration of military equipment on November 28 near "LPR"-controlled Buhaivka (36km south-west of Luhansk), within the 25km exclusion zone: 14 towed artillery pieces, 24 MBTs, 100 unspecified armored vehicles and 30 trucks, the OSCE said.

"The SMM also observed: 12 armored personnel carriers (APCs) and more than 20 trucks in the area of government-controlled Avdiyivka (17km north of Donetsk) heading in the direction of Kramatorsk; two armored personnel carriers (BTR-70) – one of which carried soldiers – at different locations in the area of government-controlled Novoaidar (49km north-west of Luhansk); four infantry fighting vehicles (BMPs) at a training area in "LPR"-controlled Shymshynivka (28km south-west of Luhansk); three military-type trucks (with no registration plates) carrying armed men near "LPR"-controlled Krasnodon (51km south-east of Luhansk) moving in the direction of Luhansk city; two military-type trucks (with no registration plates) in the area of "DPR"-controlled Oktiabr (29km north-east of Mariupol)," the update said.