Poroshenko's administration: No threat of Russian proxies' attacks on OSCE in Donbas

The Ukrainian president's administration says there is currently no threat of attacks or possible provocations by Russian-backed militants against representatives of the OSCE Special Monitoring Mission (SMM) to Ukraine, and the international observers are working in the Anti-Terrorist Operation (ATO) zone as usual. 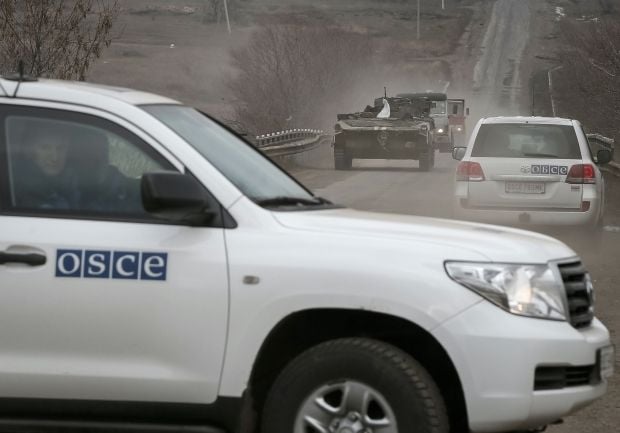 "Currently, there is no threat to them – they're working as usual, but we're closely monitoring the situation and in case we've got any information that the militants have been preparing a provocation, we're ready to report this to the OSCE SMM. We'll also do our best to prevent any provocation," Presidential Administration's Press Secretary for ATO issues Oleksandr Motuzianyk said at a briefing in Kyiv on Sunday.

In his words, an OSCE SMM patrol visited the village of Kominternove in Donetsk region on December 24 to check if militants' heavy weaponry was there. And after the OSCE monitors left the village, the militants opened fire on Ukrainian positions.

What is more, the pro-Russian terrorists were going to send one of the OSCE SMM cars along the route they were planning to shell.

"The consequence of this impudent provocation could have been the death of the monitors as well as the subsequent accusations of the incident against the Ukrainian side. However, our servicemen managed to timely notify the OSCE personnel and the provocation was disrupted," he added.

The Ukrainian Defense Ministry and the ATO press center had earlier reported that Russian-backed militants had planned to send OSCE monitors to a place where an ambush was set up with militants dressed in Ukrainian military uniform, who would open on the monitors. The enemy would then accuse the Armed Forces of Ukraine of violating the Minsk agreements and the failure to ensure the safety of the OSCE's personnel.

Despite this, the Ukrainian side jointly with the ATO headquarters managed to disrupt the Donbas mercenaries' attempt to discredit Ukraine and its army.