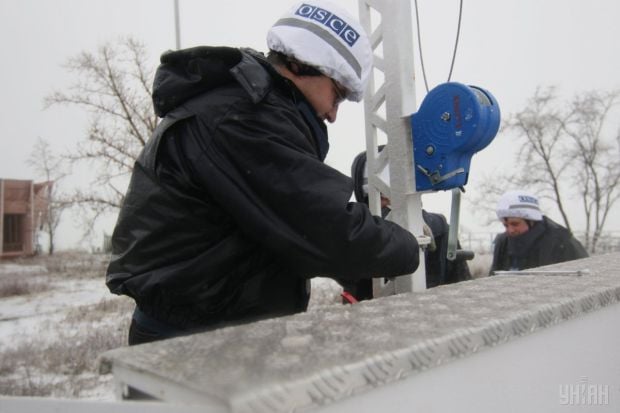 "The SMM observed a number of ceasefire violations in Donetsk and Luhansk regions. In particular, the Mission noted continued shelling in Horlivka, and a significant number of ceasefire violations in the outskirts of Kominternove. In Luhansk region, the SMM observed fresh craters assessed to have been caused by mortar fire," the OSCE SMM said on January 15 in its update based on information received as of 19:30 local time on January 14, 2016.

Positioned on the highway E58, 2km west of Shyrokyne (20km east of Mariupol), between 12:43 and 13:14, the SMM heard more than 20 undetermined explosions and an exchange of fire consisting of anti-aircraft-gun, small-arms fire, mortar and artillery at locations 5-10km north-east or north-north-east of its position.

"Whilst on the highway E58 500m west of the government-controlled checkpoint near Lebedynske (16km north-east of Mariupol), between 13:42 and 14:30, the SMM heard a total of 38 explosions (including six outgoing rounds and 16 impacts of artillery fire), 430 shots and 168 bursts of small-arms, heavy-machine-gun and anti-aircraft-gun fire, 5-10km north-east of its positions. The SMM assessed that most of the ceasefire violations occurred in the wider area of "DPR"-controlled Kominternove and Vodiane (23 and 19km north-east of Mariupol, respectively)," the report says.