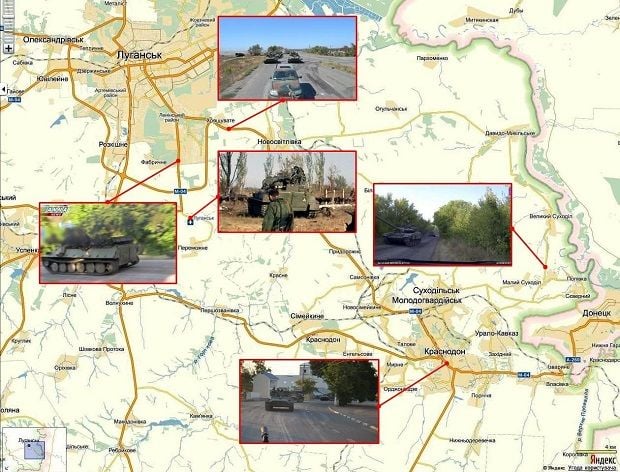 Participation of the 200th Separate Motorized Infantry Brigade in the Donbas war in 2014 / Image from sled-vzayt.livejournal

"In the fierce battles near Luhansk at the end of August 2014, Ukrainian soldiers and volunteers faced a group made up of various units of Russian military brigades. The 200th Separate Motorized Infantry Brigade (military unit 08275, Pechenga) was one of them," the translated post available at bellingcat.com reads.

"The primary evidence for this, as presented below by Askai, is that the military equipment photographed and captured in video footage near Luhansk in 2014 were returned to their base in Russia in 2015, with the changed identifying features (yellow numbers, triangles) unchanged since their time in the Donbas."

In the Armed Forces of the Russian Federation, like before in the Soviet Army, so-called tactical signs and hull numbers are applied to military vehicles in each military unit. Before the outbreak of hostilities in the Donbas, there was not a single tactical mark used for the whole 200th Separate Motorized Infantry Brigade. Instead, each unit used its own sign.

Obviously, the sequence of numbers has also been changed for reasons of secrecy.

A serviceman registered on the Russian social network site "VKontakte" as "Tolik Kondrashov" made a post in March on his page. In this post, he published a crude poem about how life is horrible for a kontraktnik (contract soldier) in Pechenga, about the false promises of commanders, and about a trip to Luhansk with the goal of killing enemies and saving his Slavic brothers. The poem has little value when compared to the photograph below it.

On Kondrashov's photo, a number of units of military equipment from the 200th Brigade are in a village called "19th Kilometer," near Pechenga, where the unit is located. Dozens of vehicles have the yellow identifying triangles and hull numbers on the front side of the chassis. Also in this photograph is a MT-LB BMK with its "relatives" that is not adorned with white numbers and tactical signs. 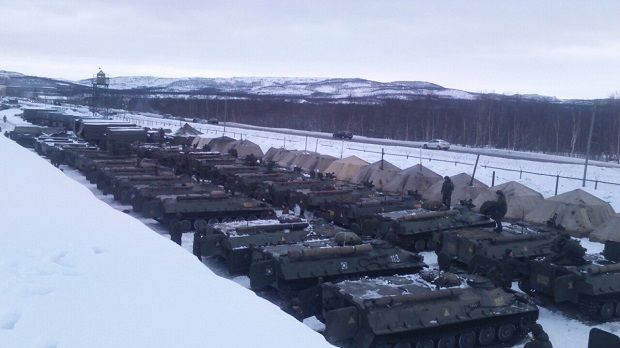 Dozens of vehicles have the yellow identifying triangles and hull numbers on the front side of the chassis / Photo from vk.com/id274414320

Not only social media were a useful source for the OSINT analysis.

The pro-Russian channel ANNA-News happened to publish a video in September 2014 of armored vehicles from the 200th Separate Motorized Infantry Brigade. In the segment, in which the story is told of how the courageous "militia" of the Donbass liberated the Luhansk Airport from mythical Polish and Georgian mercenaries, we can see an MT-LB BMK in the fifth minute. The video tells of how there was the "removal of wounded militiamen from the airport." The faces of the servicemen on the vehicle are hidden due to image blurring.

In fact, what ANNA-News showed was one of the Russian MT-LB BMKs of the 200th Separate Motorized Infantry Brigade. "In the video, we can clearly see the yellow number 784 and the identifying triangles on the hull of the chassis, to the right of the armored door," the material said. 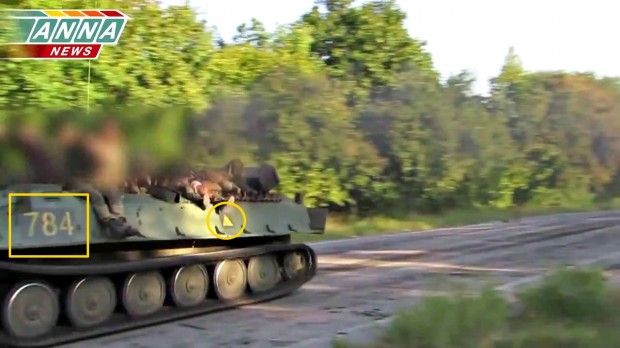 The author says that another selection of circumstantial evidence regarding to the 200th Brigade in the Donbass in 2014 would be presented in a second section, still to come.

Bellingcat in turn said it would publish the second part of this investigation when it is available.

"This material contains the direct evidence of the participation of the 200th Separate Motorized Infantry Brigade of the Armed Forces of the Russian Federation in military operations in Donbas in summer 2014. Thus, once again we've got the facts of Russia's military aggression against Ukraine. And not only the Budapest Memorandum and many other international agreements, but also the Constitution of Russia have been violated, because Russian President Vladimir Putin had not been authorized by the Council of the Federation by the moment of the incursion to use the armed forces in Ukrainian territory," the narrator on the video concluded.