The Ukrainian Defense Ministry's GUR Main Intelligence Department links the fact that the enemy's sabotage and reconnaissance groups have become more active near the Ukrainian-controlled strategic port city of Mariupol with their preparation for amphibious landing. 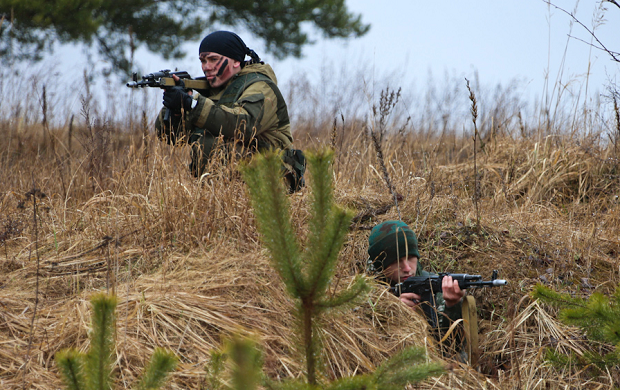 Three Russian soldiers were killed and another five were wounded in a skirmish in the Mariupol sector / Photo from minoborony.rf

The Ukrainian intelligence agency has received confirmation that "the 9th Separate Motorized Rifle Regiment from in the city of Novoazovsk has been enhanced by 1st Army Corps units, including the 810th Separate Marine Brigade of the Coastal Defense Troops of the Russian Federation's Black Sea Fleet."

The Ukrainian intelligence service reports that the command of the Armed Forces of the Russian Federation took measures "to 'legalize' the presence of Russian Marines in that area and to conceal the fact that the amphibious operation is being prepared."

In particular, "under an order issued on February 12, 2016, by so-called Chairman of the [self-proclaimed Donetsk People's Republic] DPR Alexander Zakharchenko, the 9th Separate Motorized Rifle Regiment was renamed the 9th Special Motorized Rifle Regiment of Marines and personnel of the 9th special regiment were provided with Marines' uniform elements, namely black berets, vests, and chevrons. Military hardware was covered with identifying markings," the GUR said.

Three Russian soldiers were killed and another five were wounded in a skirmish in the Mariupol sector in the past day, the GUR added. The Ukrainian intelligence agency identified the killed soldiers' names: section commander Sergeant of the Russian Armed Forces Leonid Nikitin (the date of birth: 24.09.1995, born in Arkhangelsk), Privates Igor Sidorov and Vasily Petrachenkov.

According to the Ukrainian intelligence agency's earlier reports published on Saturday, February 20, nine Russian soldiers were killed and another eight were wounded in fights near the town of Maryinka in Donetsk region. The Russian fighters' bodies were secretly taken from the militant-controlled city of Donetsk to Russia.

On February 20, intensive firing continued in the Anti-Terrorist Operation zone, and such towns as Krasnohorivka and Maryinka were under sniper fire. The enemy attacked Ukrainian troops in the ATO zone 56 times in the last day, using small arms, grenade launchers, 120mm and 82mm mortars and infantry fighting vehicles. In particular, 14 attacks were mounted on the villages of Luhanske, Zaitseve, Mayorsk (the Sloviansk sector); 34 attacks were directed towards the towns of Avdiyivka, Krasnohorivka, and Maryinka, and the villages of Opytne and Pisky, both near the ruined Donetsk airport (the Donetsk sector). Eight attacks were launched on the villages of Hnutove, Talakivka, Vodiane, and Shyrokyne (the Mariupol sector).