The combined Russian-separatist forces attacked Ukrainian army positions in eastern Ukraine 41 times in the past 24 hours, including 25 times in the Mariupol sector, 15 times in the Donetsk sector and once in the Luhansk sector, according to the press center of the Anti-Terrorist Operation (ATO) Headquarters. 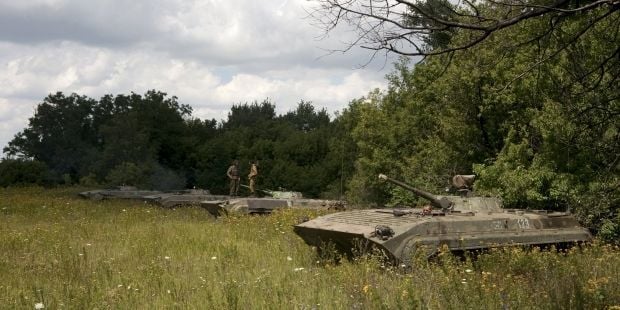 In the Mariupol sector, the enemy fired heavy machine guns and grenade launchers of various systems on the Ukrainian positions near the towns of Maryinka and Krasnohorivka, and the villages of Novotroyitske, Taramchuk and Talakivka, as well as a Zu-23-2 towed 23mm anti-aircraft twin-barreled autocannon near the village of Berezove, the ATO HQ said in an update as of 06:00 Kyiv time on June 16.

Read alsoUkraine records 58 militant barrages, one tank attack in last dayAt 22:00 Kyiv time, the enemy started firing 120mm mortars from the southwest outskirts of the temporarily occupied town of Dokuchaievsk towards the Ukrainian fortified positions near Novotroyitske and Berezove. In addition, an enemy tank was firing on peaceful neighborhoods of Krasnohorivka.

In the Donetsk sector, the illegal armed groups fired heavy machine guns and grenade launchers of various systems on the Ukrainian fortified positions near the town of Avdiyivka, and the villages of Troyitske, Novhorodske and Zaitseve. The enemy also used infantry fighting vehicles and heavy mortars near the village of Luhanske. Snipers were also active there. Later, the Ukrainian fortified positions near Avdiyivka were attacked with the use of 82mm mortars.