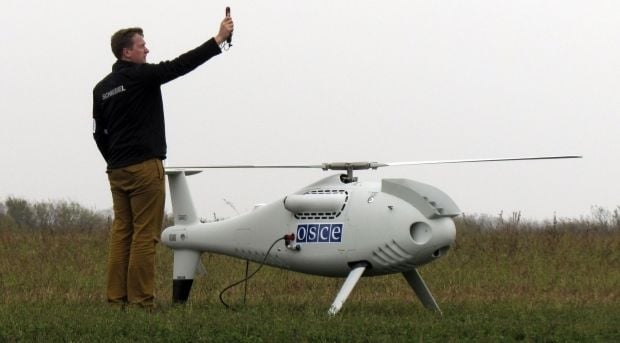 "Systematic attacks of the representatives of the occupied areas of Donetsk and Luhansk regions on the UAVs of the OSCE SMM. Just this week, one vehicle was shot down and another two damaged. The attack on UAVs has a reason: they [UAVs] collect information on the location of military equipment, and these data confirm non-fulfillment of the Minsk agreements by the representatives of the occupied areas of Donbas," said Ms Olifer.

The spokeswoman has also noted that hostilities make it impossible to recover the Donbas infrastructure, destroyed by the war.

Read also2 OSCE SMM's UAVs come under fire in Donbas, another one downed"This was discussed at a meeting of the economic sub-group. The sites which had already been reconstructed, have to be rebuilt again, such as a railway run between Mykytivka and Maiorsk. The repair crews can only start their work after the area is demined," she said.

Read alsoAlexander Hug: "We note a sustained supply of ammunition in areas not controlled by Gov't"As reported earlier, Belarusian capital Minsk on Wednesday hosted a meeting of the Trilateral Contact Group on the Donbas settlement.

Leonid Kuchma took part in the work of the group via Skype.