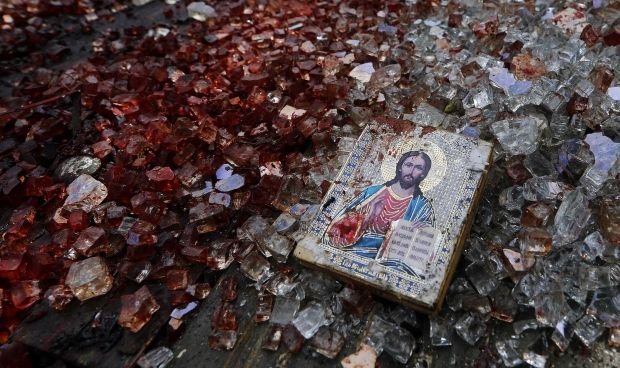 "It's women and children that are most vulnerable in the face of this war. According to recent data, there are 1.7 million internally displaced persons in Ukraine. Of them, there are about 900,000 women and 236,000 children. In the past two years, 495 Ukrainian women were killed in Donbas," Gerashchenko said in a statement whose copy is available on Facebook.

"Let me mention a young woman, Olena Lafazan, who was killed in shelling of [the Ukrainian-controlled city of] Mariupol while she was trying to cover the daughter with her body. I'd like to mention [three-year-old] Klym Klymenko's young mother, who saved the boy, having shielded him with her body during [Smerch] attacks on [the Ukrainian-controlled town of] Kramatorsk in February 2015. Some 68 children have been killed and 152 children have been wounded since the beginning of the armed conflict," she added.

Read alsoMilitants threaten Ukrainian prisoners with 30-year imprisonment - GerashchenkoGerashchenko also cited statistics, indicating that 2,130 members of the Armed Forces of Ukraine have been killed since the beginning of Russian aggression, among them were two women. "As a result [of the war in Donbas], 1,937 children have been orphaned, 1,213 women have become widows, 1,975 women have lost their sons. Another 142 women have still been waiting for the release of their family members from captivity in the Occupied Regions in Donetsk and Luhansk Oblasts, or ORDLO," she said.

According to Gerashchenko, the situation regarding the violation of the rights of women and children is particularly complicated in the temporarily occupied territories. "Ukrainian women are taken captive by the Russian occupation forces and their mercenaries. According to the SBU Security Service of Ukraine, 238 women have been captured by ORDLO fighters during the two years of Russian aggression. As of now, 233 women have been found and released due to Ukrainian authorized agencies' efforts, while another five women are still captives," she said.

Read alsoJournalist Maria Varfolomeyeva freed from militant captivity (photos)The Ukrainian envoy also mentioned Kremlin hostage Nadiia Savchenko, who spent almost two years in a Russian jail, while another Ukrainian woman, journalist Mariia Varfolomeieva was held captive for over a year in occupied Luhansk. "And who did Ukraine give the occupiers to free these Ukrainian women? These were regular soldiers of the Russian army: [Alexander] Alexandrov and [Yevgeniy] Yerofeyev [who were swapped] to release Savchenko and Ivan Gorbunov [was exchanged] for Varfolomeieva," Gerashchenko said at the UN Security Council meeting.

"This is symbolic of war in Donbas – Russian men have been fighting against Ukrainian women and children, killing and maiming them, taking them captive," she added.

Read alsoUkrainian citizen Klykh convicted in Russia gone mad due to torture – human rights activistsMillions of people have become victims of Russian military aggression in Ukraine since the spring of 2014 with "the Russian Federation being fully responsible for the violation of human rights in the occupied Crimea and Donbas," she said.