Combined Russian-separatist forces attacked Ukrainian army positions in eastern Ukraine 54 times in the past 24 hours, including 31 attacks in the Mariupol sector, 18 in the Donetsk sector, and five in the Luhansk sector, according to the press service of the Anti-Terrorist Operation (ATO) Headquarters. 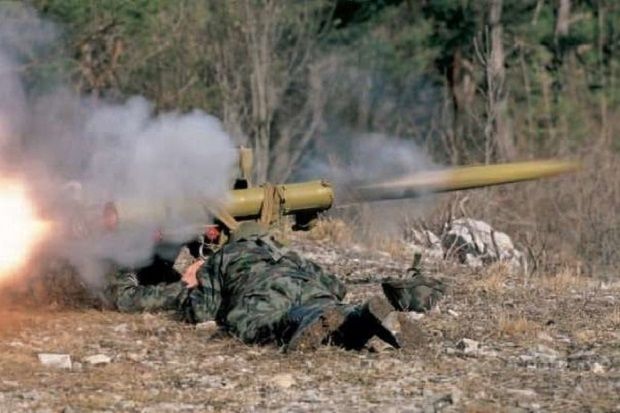 In the Mariupol sector, the enemy fired small arms, machine guns, grenade launchers near the town of Maryinka and the village of Novomykhailovka, and lobbed 82mm mortar shells into in the village of Pavlopil. Further, anti-tank missile systems, banned 120mm mortars, grenade launchers, and machine guns were used to shell the villages of Talakivka and Shyrokyne near the Ukrainian-controlled strategic port city of Mariupol.

"The militants opened fire from guns of infantry fighting vehicles, rocket-propelled grenades and small arms on the defenders of the village of Starohnativka. Mortars, machine guns and grenade launchers were used to shell the Ukrainian fortified positions in the town of Krasnohorivka and the village of Hnutove. During this period, the Ukrainian units in the village of Vodiane were attacked with weapons of different calibers, including 152mm cannon artillery systems [which are banned under the Minsk agreements]," the ATO HQ said.

Read alsoUkraine reports 53 attacks on its troops in Donbas in past dayIn the Donetsk sector, the occupiers fired on the Ukrainian positions in the village of Zaitseve, using rocket-propelled grenades and small arms, while infantry fighting vehicles and heavy machine guns were used to attack the villages of Luhanske and Novhorodske.

"The militants continued firing from 82mm mortars on the defenders of the villages of Verkhniotoretske and Troyitske, while mortars of both calibers were used to shell the town of Avdiyivka and Butivka coal mine," the press center said.