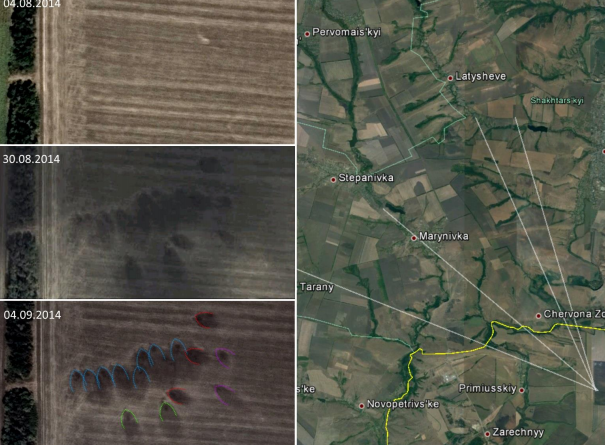 An MRLS firing position near the village of Primiusskiy, Russia / Image from Bellingcat

"In total, as evidenced by the number of impact craters, thousands of artillery projectiles were fired by the Russian military on targets inside Ukraine in the summer of 2014," they concluded.

The main findings are, among others, that artillery units of the Russian Armed Forces fired at least on 149 separate occasions attacks against Ukraine in the summer of 2014. Another 130 locations were judged likely to have been used as artillery position.

"408 artillery target sites inside Ukraine within range of Russian artillery systems have a trajectory crossing the Ukrainian-Russian border, 127 of them are within 3 km of the Russian border," says a report by Sean Case and Klement Anders, which was titled "Putin's Undeclared War: Summer 2014 – Russian Artillery Strikes against Ukraine" and presented with the map.

We invite all readers to download our data and verify our findings on our interactive map https://t.co/A2L28BAXzo@bellingcat#PutinatWar

"Due to the current lack of publicly-available satellite imagery evidence and the rigid classification criteria used here, these figures represent lower bound estimates of the true numbers of artillery attacks, i.e. there were likely considerably more than 149 attacks as already indicated by the 130 further likely artillery positions," the report said.

Read alsoOSCE counts 2,900 truce violations amid Svitlodarska Duha battles within one dayBellingcat experts concluded that artillery attacks of the Russian Armed Forces from Russian territory began from early July 2014 and increased in frequency and scale into August and September 2014.

"Cross-border artillery attacks can be found in the entire border area of the conflict zone in the Donetsk and Luhansk regions. Due to the frequency, spatial distribution, and scale of the artillery attacks considered in this report, it is impossible to consider these attacks merely as accidents or as the actions of rogue units. These attacks can only therefore be considered as acts of war of the Russian Federation against Ukraine," the report said.

UNIAN memo. After the annexation of the Autonomous Republic of Crimea, which was part of Ukraine, Russia in March 2014 started to destabilize the situation in Donbas, eastern Ukraine. Russia has been shipping weapons to terrorists of the two self-proclaimed Donbas republics, also sending its regular troops there.

On February 12, 2015, peace agreements on Donbas were signed in Minsk in an attempt to end hostilities in Luhansk and Donetsk region. The agreements stipulate, among other things, a full ceasefire from 00:00 local time on February 15, 2015, the withdrawal of all heavy weapons and swaps of prisoners of war. However, the Russian-backed separatists regularly violate all the agreements.