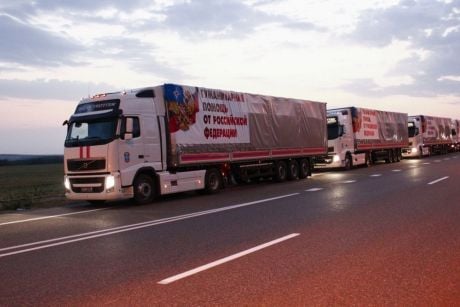 "The 69th humanitarian convoy of the Emergency Situations Ministry has reached its destination. Humanitarian aid is being unloaded at drop-off stations in Donetsk and Luhansk regions," a spokesman for the ministry said on Thursday, September 28.

The ministry claims that the entire cargo will be distributed among socially significant facilities and residents of Donetsk and Luhansk regions.

Read alsoOSCE: 66th Russian convoy cross into Ukraine, return through Donetsk border crossing pointRussia has been sending "humanitarian" aid to Donbas since August 2014. More than 70,000 tonnes of such aid have already been supplied.

The recent convoy moved through the Donetsk and Matveyev Kurgan checkpoints, both based in Russia.

Ukraine's Ministry of Foreign Affairs has repeatedly called on Russia to stop the violation of Ukraine's sovereignty by supplying the so-called humanitarian assistance.

If you see a spelling error on our site, select it and press Ctrl+Enter
Tags:warDonbasRussianhumanitarianconvoy