Russia's hybrid military forces attacked Ukrainian army positions in Donbas 22 times in the past 24 hours, with one Ukrainian soldier reported as wounded in action (WIA), according to the press service of the Anti-Terrorist Operation (ATO) Headquarters. 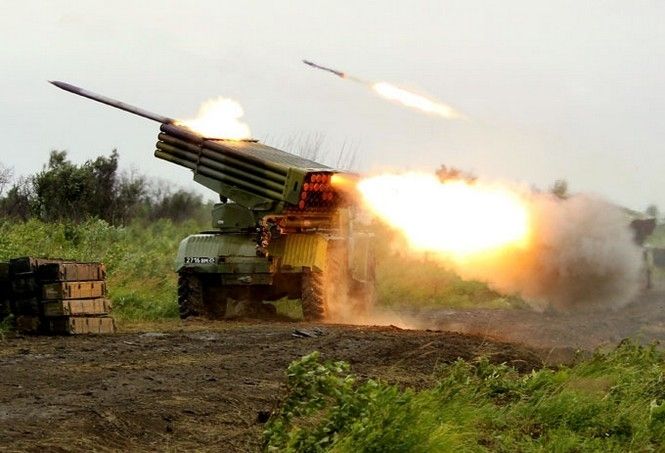 In the Mariupol sector, the enemy was firing a 122mm Grad-P portable rocket launcher, rocket-propelled grenade launchers and a heavy machine gun on the Ukrainian positions near the village of Shyrokyne for one hour in the afternoon. Later, the militants used an 82mm mortar there.

Furthermore, starting from 18:00 Kyiv time, the enemy was firing a Grad MLR system on the Ukrainian fortified positions near the village of Talakivka, having launched 38 rockets. Militants also used 120mm mortars twice firing on the residential sector of the village of Vodiane.

Read alsoATO HQ: First Grad attack on Ukraine amid "school ceasefire" in Donbas (Photos, video)In the Donetsk sector, the Ukrainian fortified positions near the town of Avdiyivka and the village of Nevelske came under fire from grenade launchers and heavy machine guns twice. The invaders shelled the Ukrainian positions near Butivka coal mine, and the villages of Zaitseve and Maiorsk.

In the Luhansk sector, the Ukrainian positions near the village of Triokhizbenka were attacked four times with the use of a grenade launcher and small arms. The Ukrainian military had to fire back, but one Ukrainian soldier was wounded.

If you see a spelling error on our site, select it and press Ctrl+Enter
Tags: #ATO#Donbas#Ukraine#Grad#shelling#RussianAggression
Latest news