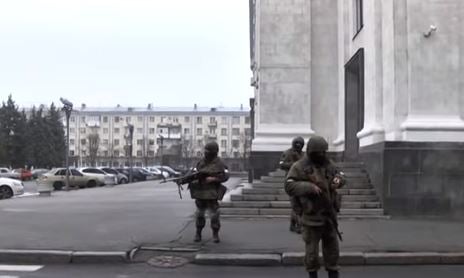 "An APC has been brought to the 'Ministry of Internal Affairs' in Luhansk, the building is surrounded by armed people, some are carrying hand grenade launchers. ['Minister' Igor] Kornet seems to have decided to 'appeal the decision of the court' about his dismissal from the post of minister. Now the main thing is that residents of neighboring houses do not become victims of 'the appeal.' These feuds are happening in the heart of the city," Dikhtyarenko wrote on Facebook.

At the same time, Novaya Gazeta sources claim that the military are equipped with small arms and mortars. Plotnitsky, who was in the workplace in the morning, allegedly ordered them to liberate the city, but they ignored the order. The unknown people are blocking access to administrative buildings, employees have been dismissed to their homes.

According to unconfirmed reports, three military Ural trucks with the "security" militants, subordinated to the head of the so-called "Donetsk People's Republic" ("DPR") Alexander Zakharchenko, arrived in Luhansk from the Russian-occupied city of Donetsk.

At the same time, according to journalist Denis Kazansky, it might be the "Big Brother" that has intervened in the feud of Plotnitsky and Kornet. "There are 'little green men' with white armbands in the city – the regular army of the Russian Federation entered Donbas with the same armbands in the summer of 2014. Perhaps, the 'Big Brother' has intervened in the conflict of Plotnitsky and Kornet," he wrote on Facebook.

If you see a spelling error on our site, select it and press Ctrl+Enter
Tags:LPRDPRmilitantscoup