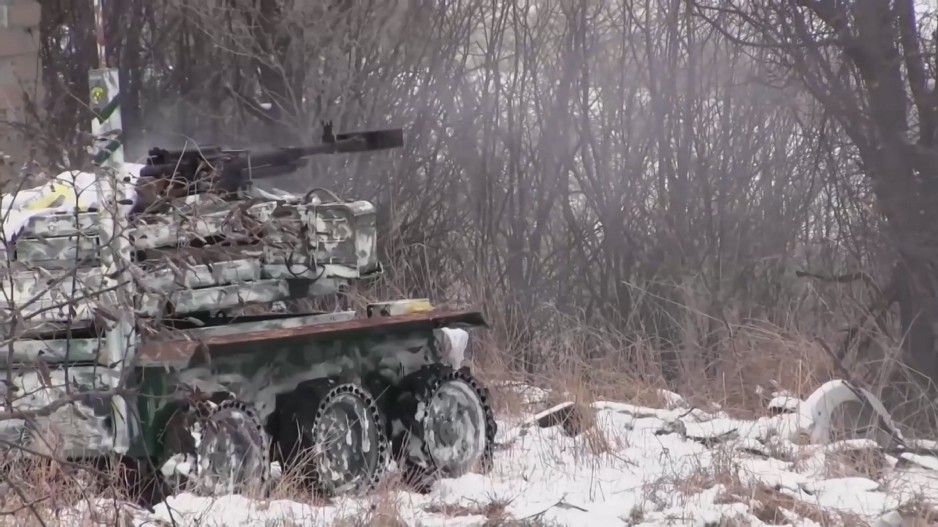 Ukrainian-made unmanned vehicles able to engage targets from effective machine guns could save lives amid the ongoing hostilities in Donbas.

In May 2017, a documentary aired in Ukraine featured a footage showing Ukrainian soldiers used a remote-controlled turret on six wheels and with an attached camera to fire at Russian-led militants in a nearby house, the Atlantic Council’s DFRLab reported in its Minsk Monitor series.

In other words, the UAF weaponized robot in the tradition of a teletank, which was used in the 1930s and 1940s by the Soviet Union.

Ukrainian soldiers demonstrated how this machine was used. They were using an interface sent from the robot to a computer, with an interface that showed multiple perspectives from a front-facing camera installed on the vehicle.

The robot was operated through a set of controls, with the operator manning the vehicle similar to how an operator would drive an unmanned aerial vehicle.

After lining up the target with help from a nearby soldier with a sniper rifle scope and binoculars, the operator activated the robot’s machine gun (a 12.7mm “Utyos”) and fired at the target, which was an abandoned house where the enemy fighters were taking cover.

That model of a robot was shown at an exposition in Kyiv in October 2016 by the “Kolo” charity fund. According to the “Kolo” representatives, the robot (or “Cyber Soldier,” as it was called in a presentation video) was developed with only $10,000 by a group of Donbas-native volunteers.

Initially built on a shoe-string budget, the Hunter later saw improvements designed by the Kyiv-based firm called “Robotics”. The new version of the Hunter has a number of upgraded capabilities, including: a thermographic (infrared) camera, a movement range of between 1,500 and 3,000 meters (depending on upgrades), an encrypted signal transmitted back to the control post, and a 36-hour battery life between charges.

Ukraine’s largest defense company is following close behind. In October 2016 — at almost the same time that the Hunter was first shown off — UkrOboronProm premiered the “Phantom,” an advanced robot that strongly resembles the Hunter, with additional capabilities and modernizations.

Read alsoUkraine develops new rocket-propelled grenade launcher to replace Soviet RysThe combination of Ukraine’s robust supply of highly-educated workers trained in engineering and the necessity of innovation in the ongoing war in the Donbas has led to the frontline becoming a laboratory for new creations, both makeshift and more technologically advanced. The Hunter will likely have more future successful deployments and could lessen the human costs in Ukraine’s already-strained military.