The remembrance event was attended by senior officials, relatives and friends of the killed Ukrainian soldiers. 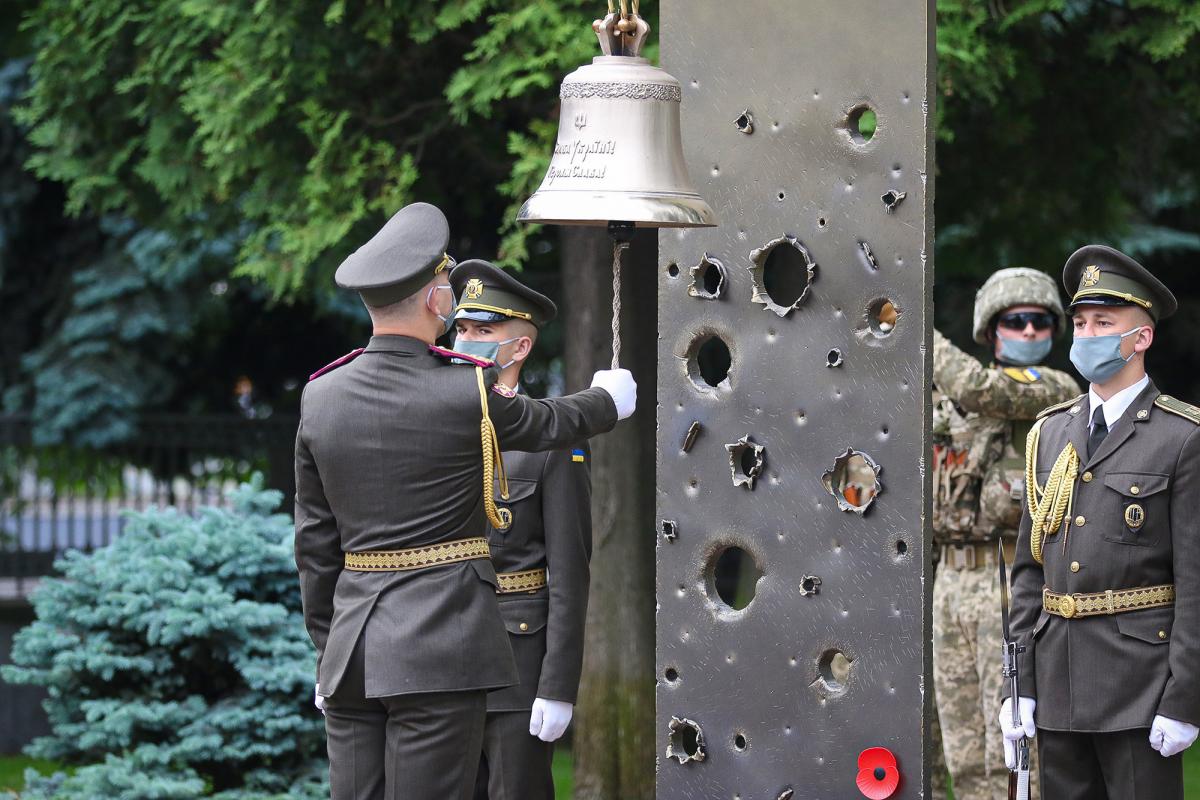 An annual event was held on June 14 at Ukraine's Defense Ministry to commemorate nine crew members and 40 Ukrainian paratroopers killed in the downing of an Il-76 aircraft by Russia-led forces over Luhansk six years ago.

The Bell of Remembrance tolled 60 times for the Il-76 victims and all those killed in the Donbas war with Russia on June 14 in different years, the press service of Ukraine's Defense Ministry said on June 14.

The remembrance event was attended by senior officials, including Defense Minister Andriy Taran, Commander-in-Chief of the Armed Forces of Ukraine Ruslan Khomchak, officers and employees of Defense Ministry departments, the General Staff, the National Guard of Ukraine, Special Operations Forces, members of the Kyiv garrison, relatives and friends of the killed Ukrainian soldiers.

Ukrainian President Volodymyr Zelensky, who is now self-isolating over his wife's confirmed coronavirus case, wrote on Facebook on that day: "We are honoring the memory of the soldiers who died in the downed IL-76 aircraft, and all the defenders of Ukraine who on that day gave their lives for our independence. We have no right to forget them. Heroes never die!"

As UNIAN reported, the Il-76 military transport aircraft was shot down by Russia-led forces near the city of Luhansk in the early hours of June 14, 2014, when it was landing. At the moment, paratroopers of Ukraine's 80th Separate Air Assault Brigade were in the airport of Luhansk, being surrounded by enemy troops. The Il-76 was supposed to deliver ammunition, equipment, and personnel. On board the aircraft there were nine crew members and 40 paratroopers. They all died.

According to investigators, the aircraft was shot down by Russia-controlled terrorists Andrei Patrushev and Alexander Gureev on the orders of Igor Plotnitsky, ex-leader of the so-called "Luhansk People's Republic" ("LPR") terrorist organization. All three are accused of committing an act of terror under Part 3 of Article 258 of the Criminal Code of Ukraine.

UNIAN memo. The Hall of Remembrance is housed by the Defense Ministry to commemorate the military personnel who have died in the Donbas war. Both employees of the ministry and the General Staff, as well as ordinary citizens are allowed to visit the Hall. Near the Hall, there is a ceremonial platform with the Bell of Remembrance and the Stele that has fragments of shells. In the Hall, there are memorial books with the names of the victims listed per each calendar day throughout the year – each spread means one day and it mentions all the dead on that particular day for all years.

The daily memorial service is performed every morning by the tolling of the bell, the number the bell tolls indicates the number of those who died on that day.

If you see a spelling error on our site, select it and press Ctrl+Enter
Tags:RussianAggressionLuhanskaircraftremembranceDonbasWardowning