The verdict, handed down in absentia, has also satisfied a class-action suit by 39 victims, awarding compensation for moral damage worth UAH 500,000 to each claimant. 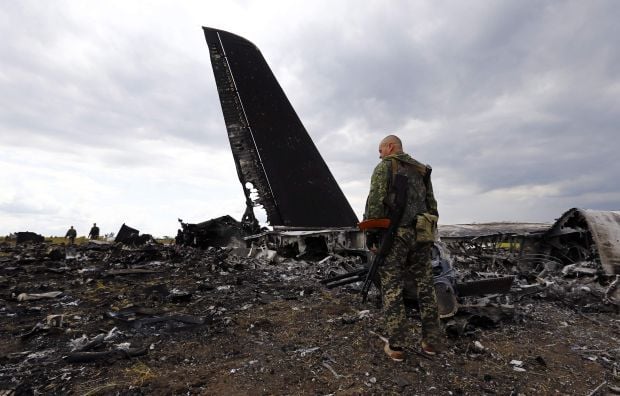 The Chervonohvardiysky District Court of Dnipro on Tuesday, March 16, ruled in absentia to sentence to life imprisonment the ex-leader of the "LPR" terrorist organization, Igor Plotnitsky, along with the two warlords in command of Russian proxy forces, Andrei Patrushev and Alexander Gureev, on charges of shooting down a Ukrainian military Il-76 plane on approach to Luhansk Airport back in June 2014.

"Igor Plotnitsky, Andrey Patrushev and Alexander Gureev, accused of shooting down an Il-76 plane carrying 40 military servicemen with the Armed Forces of Ukraine and nine crew members, were sentenced to life imprisonment," the Dnipropetrovsk regional prosecutor's office said in a statement, according to an UNIAN correspondent.

Read alsoUkraine commemorates crew, paratroopers killed in Il-76 downing over Luhansk (Video)According to the lawyer representing the families of those killed in the crash, Vitaly Pohosian, the court also satisfied a class-action suit put forward by 39 victims demanding compensation for moral damage in the amount of UAH 500,000 each.

T the court ruled that the convicts shall pay moral damage, the lawyer confirmed.

At the same time, Pohosian had been insisting that it must be the government that must pay compensation to the victims.

A military cargo aircraft Il-76 was shot down by Russian proxy forces from a MANPAD on approach to the Luhansk Airport on June 14, 2014. At the time, paratroopers with the 80th Air Assault Battalion were surrounded in the airport. The Il-76 was supposed to deliver ammo, equipment, and more personnel to support the group. All 40 paratroopers and nine crew members on board died in the crash.

According to the investigation, the terrorist act was committed by commanders of Russian proxy forces' units, Andrei Patrushev and Alexander Gureyev, on the orders of Igor Plotnitsky, the-then leader of the self-styled "LPR" terrorist organization. All three have been accused of committing a terrorist act (Article 258 Part 3 of the Criminal Code of Ukraine).

On March 27, 2017, the court found guilty of negligence in a combat situation, which led to grave consequences, Major General Viktor Nazarov, who was in charge of sending the plane to Luhansk and at the time of the tragedy was chief of staff of the Anti-Terrorist Operation. Nazarov was sentenced to seven years in prison. He appealed the verdict but in December 2020, the Court of Appeal upheld Nazarov's sentence.