Burlaka was in a crucial role supervising militant activities in Donbas and authorizing the flow of weapons across the border, the investigation says. 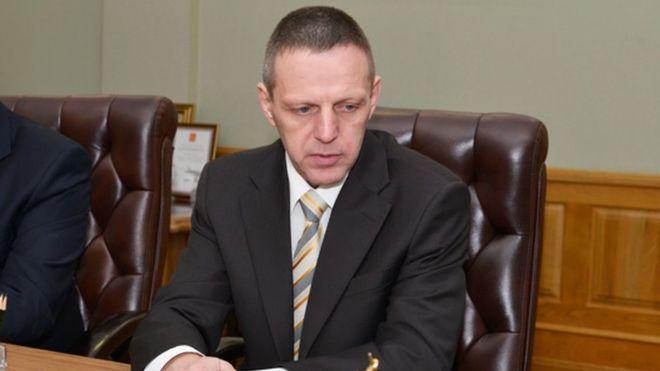 The Bellingcat investigation team, in cooperation with Russian colleagues from The Insider, and with additional reporting from Kevin Hall from McClatchy Newspapers (DC), has been able to identify the person of "Vladimir Ivanovich" as one of the top officials within Russia's FSB security service, namely Colonel General Andrey Ivanovich Burlaka, who is a person of interest in the criminal investigation into the downing of MH17.

It is noted Bellingcat has identified "Vladimir Ivanovich" as Col. General Andrey Ivanovich Burlaka, who serves as Chief of the Operational Staff of the FSB's Border Service, and is the first deputy to the head of the Border Service of FSB, who in turn is first deputy to the head of the FSB, Alexander Bortnikov. This makes Andrey Burlaka one of the senior-most officers in the FSB, two positions removed from the director, via his direct boss, army general Vladimir Kulishov. He held this same position at the time of the MH17 shoot-down.

The phone intercepts published by JIT make frequent references to a certain "Vladimir Ivanovich"; a shadowy figure who, by the start of July 2014, was already in a crucial role supervising militant activities in Donbas and authorizing the flow of weapons across the border.

In one intercept from the morning of July 16, 2014, the day before MH17 was shot down, Borodai asks "Vladimir Ivanovich" if it is possible that Russian helicopters were attacking, or could engage, Ukrainian positions near Maryinka:

Borodai: Tell me, is it possible that our helicopters could be carrying out some raids? Good morning. I beg your pardon.

Borodai: So, is it possible that our helicopters are carrying out raids near Maryinka? Ours?

Maryinka is a village that was, at the time, a frontline village near Donetsk, and although Russian Armed Forces were by then frequently conducting cross-border artillery strikes on Ukrainian positions, it seems unrealistic that Borodai believed that Russian helicopters would venture that deep into Ukrainian airspace. As such, it seems possible that he actually meant the similar-sounding village of Marinovka (Marynivka in Ukrainian) which marked the frontline south of Snizhne near the border with Russia. In fact, on that same morning, Borodai was captured in a video broadcast on a Russian TV channel while talking on the phone behind Igor Girkin, who was giving an interview from the battlefield near Marinovka (several hours later the town fell to separatist forces).

Due to the encryption being turned on at the start of the call, it is not clear what "Vladimir Ivanovich" then said to Borodai, and if helicopter support was provided.

While there is no publicly available official information of Gen. Andrey Burlaka's involvement in the Donbas war, travel data obtained by Bellingcat and a review of previously leaked or hacked correspondence corroborates the evidence from the intercepts published by JIT.

A review of Burlaka's airplane travel in 2014 and 2015 shows that he frequently flew from Moscow to Rostov, to Crimea, and to Krasnodar – the three control centers for military operations against Ukraine.

If you see a spelling error on our site, select it and press Ctrl+Enter
Tags:RussiawarFSBhybridwarMH17