The two non-nuclear system qualification flight tests of the B61-12 took place on June 9 at Tonopah Test Range in Nevada, officials said. 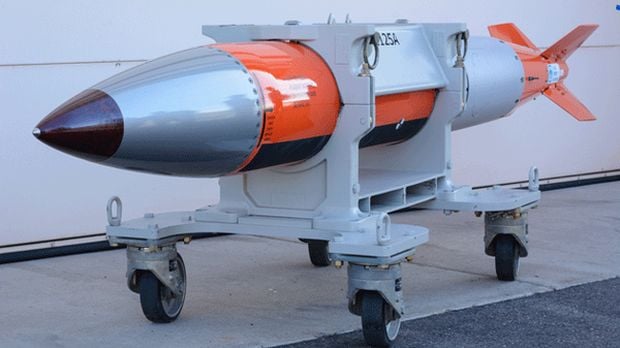 The B61-12 guided nuclear gravity bomb has gone through its first series of tests on the B-2 Spirit stealth bomber.

The Air Force, together with the Department of Energy's National Nuclear Security Administration, earlier this month released a B61-12 non-nuclear test assembly from the Spirit. The kit included a NNSA-designed bomb assembly and the Air Force's acquired tail-kit to be used on the B61-12 variant of the bomb, according to a Department of Energy release, Military.com reports.

"The achievement is also a testament to the dedication of our workforce and the enduring partnership between NNSA and the U.S. Air Force," he added in the release.

The two non-nuclear system qualification flight tests of the B61-12 took place on June 9 at Tonopah Test Range in Nevada, officials said. They were conducted by the 419th Test & Evaluation Squadron at Edwards Air Force Base, California.

The exercises marked first such "end-to-end qualification tests on a B-2A Spirit Bomber for the B61-12," the release said. "The tests are part of a series of joint tests to demonstrate both the aircraft's capability to deliver the weapon and the weapon's non-nuclear functions."

Using the B61-12 will help consolidate and replace the existing B61 bomb variants in the U.S.'s nuclear stockpile, the release said. The first completed bomb kits are scheduled to debut sometime in fiscal 2020.

In May, top Air Force officials announced trials with the B61-12 were progressing successfully.

The B61-12 modification program, which has been in the works for at least seven years, is slated to be carried by the B-2, as well as the future B-21 Long Range Strategic Bomber, known as the Raider.

The F-35 Lightning II Joint Program Office has also been working on integrating the latest modification into its weapons arsenal.

The F-35 was designed with a requirement to carry a nuclear payload. In 2015, an F-35 flew with the B61-12 to measure its vibration in the aircraft's weapons bay.

Both of the fourth-gen fighters will be able to deploy the B61-12 bomb. The B61-12 also conducted its third and final developmental test flight aboard an F-15E in 2015.

If you see a spelling error on our site, select it and press Ctrl+Enter
Tags:USAtestbombnuclear