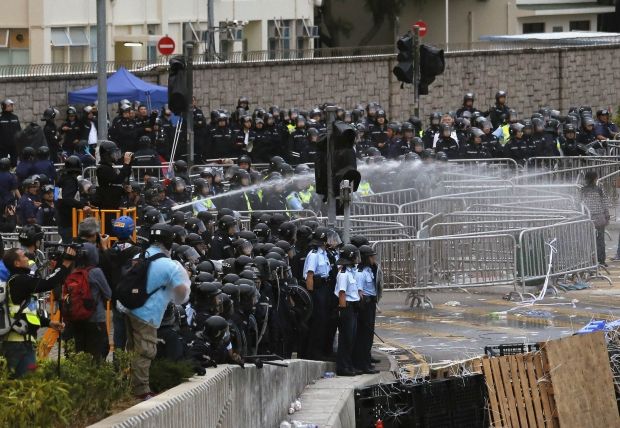 Riot police use a water cannon to disperse protesters during clashes outside the government headquarters in Hong Kong December 1, 2014 / REUTERS

“This government, as it’s currently structured in China, this is their nature – is to control, to be authoritarian,” Rubio said.

“I think that the lesson to be learned by all this is, that all this talk out there – that the hopes that these economic interchanges and dialogue with China was going to change the nature of the central government – is a fairytale. It’s wishful thinking.

“And I think there is a lesson to be learned there, that if we are hanging our hopes on the fact that more economic interchange with them is going to somehow transform them into a more open, more liberalized and more inclusive government, it doesn’t seem that way at this point. Certainly, from their reaction with what’s happened in Hong Kong. And I think that’s a factor that we need to accept today as a reality, and base our policy based on that reality because this does not leave me hopeful that this is a government, that at any point in the near future, is going to be more open and more accommodating.

“In fact, it is the tactics of a government that’s becoming increasingly more centralized, more authoritarian and more willing to take strong actions against those who challenge the authority of the Communist Party in the central government. And I think that bodes ill for the future of the region, and, quite frankly, of the world as China takes on a greater economic and military importance.”