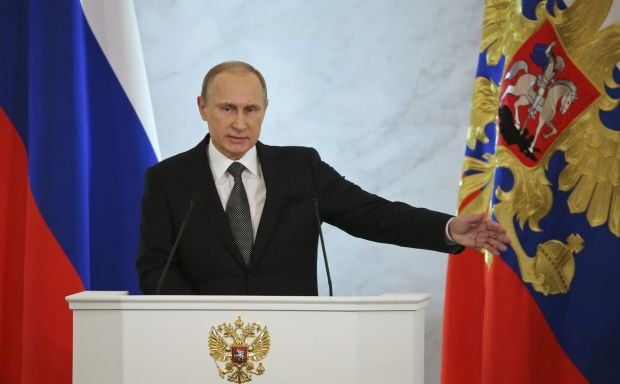 Putin had a lot of issues to address.

Russia’s economy is suffering from losses caused by a sharp fall in oil prices, as well as sanctions imposed by the United States and its allies due to the conflict in Ukraine. The Ministry of Economy has acknowledged that the gross domestic product of the world's largest energy exporting country in 2015 can decrease for the first time in six years. The ruble has lost a third of its value since Putin’s invasion of Ukraine’s Crimean peninsula in March.

Today the Bank of Russia has lowered the interest rate on foreign currency loans for banks, evidencing an attempt to slow the depreciation of ruble and reduce dollar deficit. The ruble has “substantially” deviated from its fundamental value, creating risks for financial stability and raising fears of inflation and devaluation; such statement was made on the central bank's official website, demonstrating its intentions to intervene without restrictions.

According to a survey conducted by Russian pollsters Levada Center, a large part of the population believes that the economy is weakening, with four-fifths of the respondents saying that living standard have "clearly deteriorated."

GDP is expected to shrink by 0.8 percent next year, compared with the earlier projections of 1.2 percent increase, according to the Deputy Economy Minister Alexei Vedev on December 2. Inflation has accelerated to 8.3 percent in October, the highest since July 2011. At the end of the year inflation is projected to reach about 9 percent and will slow down to 7.5 percent by the end of 2015, Vedev noted, adding that retail sales will decrease in the next year amid rising level of unemployment.

“It is difficult to imagine what can be done right now to restore economic growth, at least by 2%”, according to Maria Kazakova, an economist at Moscow Gaidar Institute for Economic Policy.

“Now we have reached a tipping point.”

Diversification of the economy and improved efficiency of public expenditures is one of the "structural reforms" needed to reverse the decline, she said.

Investors are withdrawing their capital. Net capital outflow will amount to $125 billion in 2014, more than it was previously forecast - $100 billion, Vedev says. That would be the highest annual amount since 2008, when $133,6 billion were withdrawn from the country, according to the central bank.

Creditors are also experiencing difficulties, said Sergei Dubinin, the Chairman of the Supervisory Board of VTB Bank, who led the Central Bank of the Russian Federation in 1998 during the time of default. Two days ago he said that he was observing "some panic" in the financial system.

Russia's foreign exchange reserves fell by about $90 billion this year to $420 billion, as the Central Bank sold dollars and euro to help strengthen the ruble. Yesterday the bank announced that it intervened to stop the fall of the ruble on December 1, for the first time since the bank let the ruble float freely.

Weakened global energy markets have also affected the ruble. According to Russian Finance Minister Anton Siluanov, Russia needs the price for its main export grade, Urals blend, at an average level of $100 this year and $90 in 2015 in order to keep the budget balanced. This is compared with a break-even price of $25-30 before the financial crisis of 2008-2009, according to Siluanov.

Urals is expected to be traded at $99 per barrel in 2014, less than previously planned of $104, according to the Ministry of Economy. They believe that the average price next year will be at the level of $80.

Putin can explain the economic downturn in Russia by "external conditions", says Fredrik Erixon, the director of the European Centre for International Political Economy in Brussels.

"The decline in oil prices is one of such (conditions), and sanctions from the West - the other," Erickson said by phone.

"In his speech, the president argued that the Russian economy is in good shape, and it could do well for quite a long time with a normal growth rate, if it were not the subject of such sanctions directed against Russia’s economic interests, and falling oil prices."