No breakthroughs on Ukraine expected at Putin-Merkel summit - media

On Saturday, the Russian leader will make the highest-profile Germany visit since 2013. 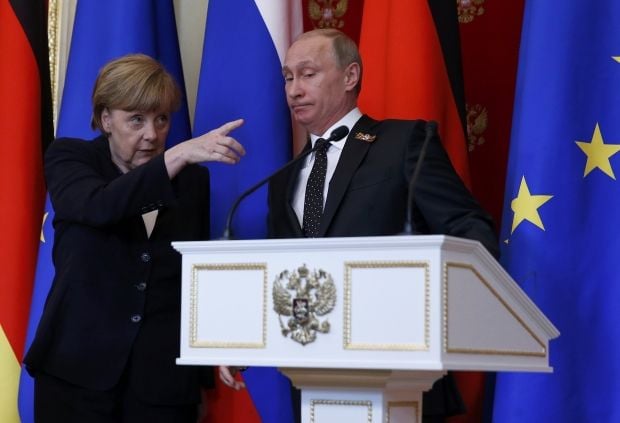 The whirlwind tearing through international relations that is U.S. President Donald Trump may be forcing Angela Merkel and Vladimir Putin to come together after years of confrontation.

Merkel has been Putin’s most implacable critic since he annexed Crimea in 2014, plunging relations to their worst in decades. On Saturday, however, the German chancellor will welcome the Russian president to an 18th century Baroque palace near Berlin for their first bilateral meeting in Germany in more than five years, handing Putin a major breakthrough in ending Russia’s isolation and reaffirming Merkel’s pivotal role in Europe despite election setbacks, according to Bloomberg.

“Merkel is hedging and Putin is exploiting,” said Josef Janning, senior policy fellow at the European Council on Foreign Relations in Berlin. After Trump met Putin while attacking Merkel and the German economy, “she needs to have her own contact with Putin. She doesn’t want to give up the chance of keeping Putin within a margin that is manageable for Germany.”

This is Putin’s highest profile bilateral trip to Germany since 2013, though he and Merkel have met at international events including last year’s Group of 20 summit in Hamburg. Merkel has visited Putin in Russia several times, most recently in May. She’s advocated engagement principally to deliver blunt messages rather than being a bridge between the European Union and Russia.

While officials from both countries played down the significance of the invitation to Putin, it comes after Trump last month slammed Germany as “totally controlled by Russia” because of its dependence on Moscow for natural gas supplies. Work on a new gas pipeline linking the two countries, the Gazprom PJSC-backed Nord Stream 2, began in May amid a U.S. threat of sanctions targeting the project.

The conflicts in Syria and Ukraine are on the agenda for discussion as well as “big commercial projects in the context of threats that are being made by third countries,” Kremlin spokesman Dmitry Peskov told reporters on a conference call on Friday.

There’ll be no breakthrough over Ukraine, though “it’s advantageous for Putin to play along with Merkel because there’s no-one else in Europe to rely on,” said Andrey Kortunov, head of the Russian International Affairs Council, a research group set up by the Kremlin.

“Merkel understands that it’s now time to look for opportunities with Russia,” said Alexander Rahr, a former member of the German Council of Foreign Relations who’s now a senior adviser to Gazprom. “If it’s possible to take a step forward on Syria, energy issues or Ukraine, it will be good for Germany as the leader of Europe.”

Merkel’s suffering domestically after a political backlash against her 2015 decision to leave the border open and allow more than 1 million refugees, most of them Syrian, into Germany. She needs an end to the war in Syria to allow migrants to return home, while she’s also under pressure from German businesses to allow the lifting of EU sanctions on Russia over the Ukrainian crisis.

“Exchanges between Germany and Russia have increased markedly in recent months,” Wolfgang Buechele, head of the German Eastern Business Association in Berlin, said in a statement. “That’s a welcome development.”

Germany’s seeking a political solution on Syria that would create conditions for refugees to return, though “we’re still a long way away from that,” Seibert said on Wednesday.

If you see a spelling error on our site, select it and press Ctrl+Enter
Tags:RussiaPutinMerkelGermany