A Russian IL-20 military aircraft with 14 personnel on board disappeared over the Mediterranean on Monday. 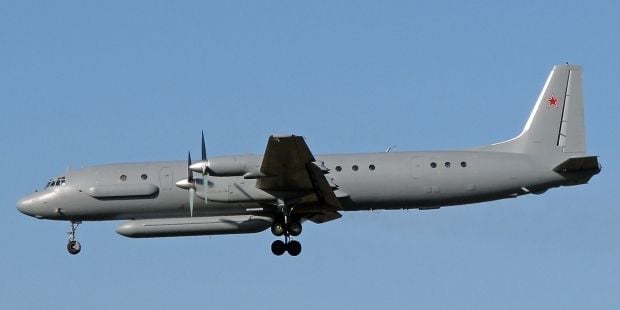 A Russian maritime patrol aircraft with multiple personnel on board was inadvertently shot down by Syrian regime anti-aircraft artillery on Monday after the Syrians came under attack by Israeli missiles, according to a U.S. official with knowledge of the incident.

The U.S. official said the regime was actually trying to stop a barrage of Israeli missiles, CNN reported.

A second official confirmed that Israel was responsible for the missile strikes on the Syrian regime.

The Russian state news agency TASS reported that a Russian IL-20 military aircraft with 14 personnel on board disappeared over the Mediterranean on Monday. According to TASS, the ministry of defense specified that "the mark of IL-20 went off the radars disappeared during the attack of four Israeli F-16 aircraft on Syrian targets in the province of Latakia."

The Israelis had fired multiple missiles against targets in the coastal area of Latakia where Russian has based much of its military presence, including aircraft. In an attempt to strike back against the Israelis, the Syrians launched extensive anti-aircraft fire, the official said and the Russian aircraft was hit.

The U.S. found out about the incident because Syrian forces broadcast an emergency search and rescue radio call on an international frequency. The U.S. then got a direct message from another country about the type of aircraft and circumstances of the incident. The official would not identify that country, but it is likely that Russia is the only nation that would know exactly what type of aircraft was shot down.

A spokesman for the Pentagon told CNN that the missiles were not fired by the U.S. military but would not speak as to who was behind the strikes. An Israel Defense Forces spokesman declined to comment on the reports.

The aircraft was shot down by an anti-aircraft system the Russians sold to the Syrians several years ago, the official said. The Syrian air defense network in western Syria is very densely populated with anti-aircraft missile and radar systems.

In February, the two-man crew of an Israeli F-16 ejected from their aircraft when a missile exploded near them, damaging their aircraft as they finished conducting a mission against Syrian forces.

An Israeli defense official told CNN earlier this month that Israel has struck Syria 200 times in the past 18 months to prevent the deployment of Iranian weapons in the region.

If you see a spelling error on our site, select it and press Ctrl+Enter
Tags:RussiaSyriaIsraelaircraft